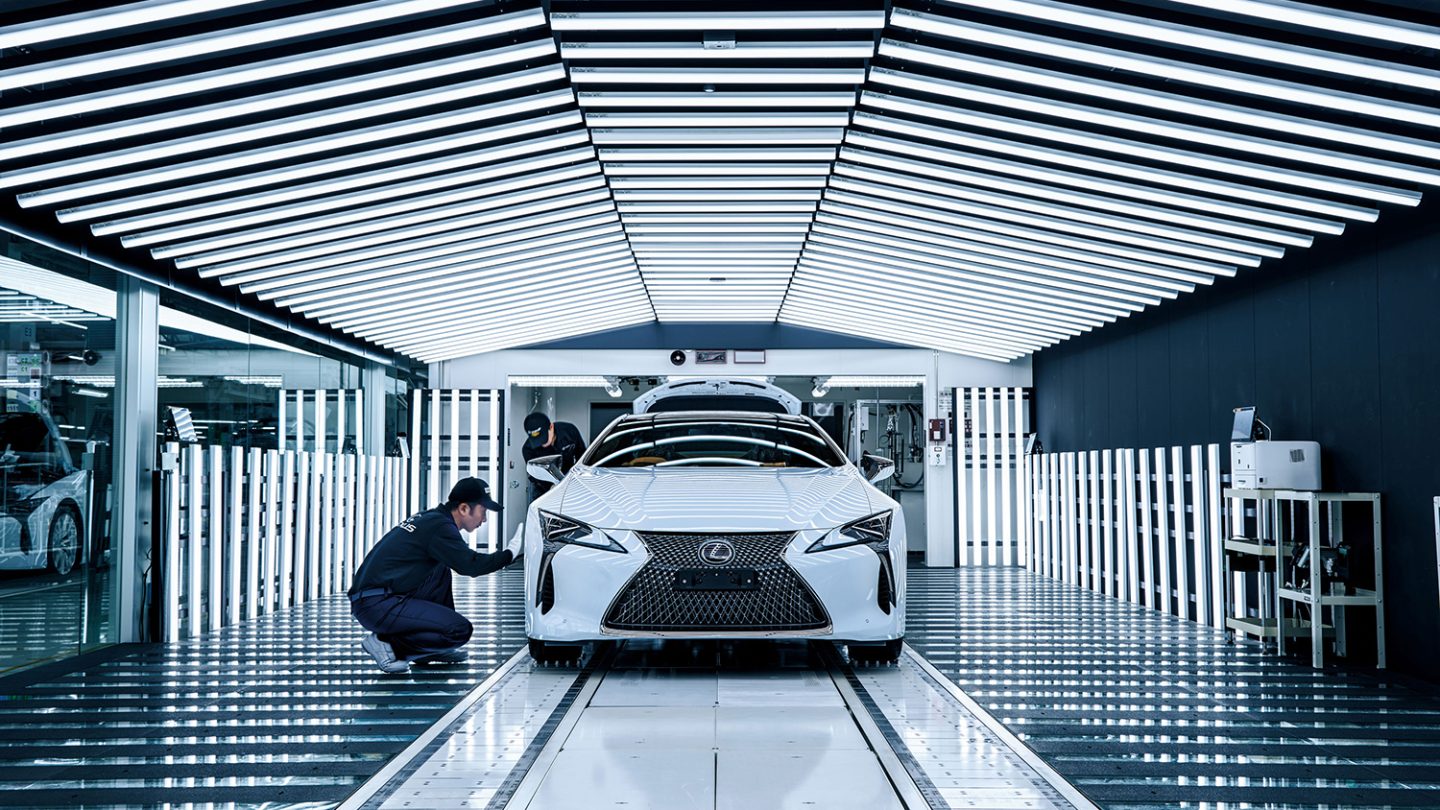 Yokohama, Japan sits more than 5,500 miles to the east of Berlin, but locals need only look to the district of Motomachi to feel as though they’ve been whisked away to Germany. There, in the same Toyota plant that produced the fabled Lexus LFA seven years ago, a new beast has been born. With its impressive power, responsive handling, and the thunderous roar of a 471-hp 5.0-liter V8, the Lexus LC 500 indeed feels better suited to the Autobahn than the busy streets of Japan. By striking a balance between the sharp styling of Japanese luxury cars and precision engineering made famous in Germany, Lexus has managed to build a luxury coupe unlike anything else in its class.

The Lexus LC-500 is a Grand Tourer cut from a different cloth. The fastback 2-door features a front engine, rear-wheel drive, and a 10-speed automatic transmission. Its 5.0-liter V8 motor produces 398 lb-ft of torque and a growl that echoes from the moment the engine turns over until it reaches its electronically limited top speed of 168 mph. This car screams, and it’s styled to match. The LC still looks like a Lexus, but on steroids. Lots of steroids. If the IS 350 is Bruce Banner, Lexus’s LC 500 is the Hulk.

I recently spent a week driving an LC 500 loaned to me by Lexus. A hybrid drivetrain is available for an additional $4,510, but my loaner packed the more powerful V8 and a base price of $92,000. The future may be electric, but no electric motor or hybrid motor will ever stir the soul like a gas engine — especially this one.

The Lexus LC 500 features performance and a design befitting a car in this class. Sharp lines and a low, wide stance take the design identity Lexus has adopted in recent years in an exciting new direction. From the snarling grill to its angular rear lighting, this car is wonderfully unique from top to bottom. The aggressive lines are further enhanced by novel styling touches, such as the stunning infinity lighting effect achieved using one-way mirrors in each tail lamp.

It looks sharp, of that there is no question. But sports cars are made to be driven and the LC 500 offers a thrilling ride. It’s fast, it’s fun, and it gives German sport coupes a real run for their money. 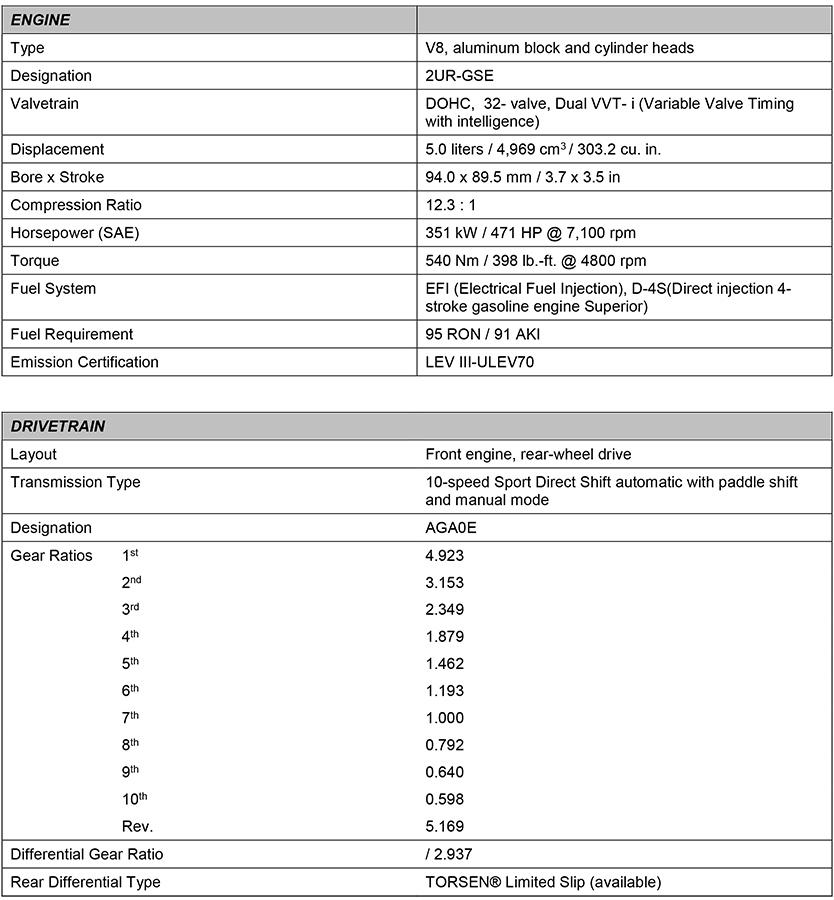 With that out of the way, let’s take a ride.

After the car’s respectable 4.4-second sprint to 60 mph is achieved, the LC plods to a less impressive quarter-mile of 13.2 seconds. The base 911 is three-tenths quicker to 60 mph and manages to run the quarter-mile in under 12 seconds. In fact, most cars in this class have quicker quarters. Even the 4,700-lb S550 Coupe manages to outpace the LC by a couple tenths at 13 seconds flat, despite taking a tick longer to get to 60 mph.

I found shifting to be something of an issues with the LC’s 10-speed transmission, and that may play a role in the car’s less-than-stellar quarter. With its pedal to the floor, the car’s shift timing seemed off. Far worse was the LC’s throttle response while cruising. When driving a $100,000 sports car, I want my head pinned back almost instantly after stomping on the gas pedal. Yet even in Sport or Sport+ mode, downshifts took several beats too long.

Thankfully, the magnesium paddles on the steering wheel were far more responsive. Even when quickly downshifting two gears at a time, power reached the road much quicker than automatic downshifting in any of the car’s six drive modes, Sport+ included.

The LC 500’s Normal driving mode is just that, and I spent most of my time in Sport mode. Sport firms up the car’s dampers, tightens the steering, and of course holds gears a bit longer to make the throaty V8’s power more accessible. Sport Plus makes further adjustments to the steering, suspension, and shift points, but it also enhances the car’s already strident soundtrack. It’s nowhere near as irritating as the synthetic moan of an M-tuned BMW, but it’s a bit much while away from the track.

Moving in the other direction through the LC’s driving modes transforms the snarling beast into an elegant grand touring coupe. The 5.0-litre V8 won’t sing you any lullabies, but Comfort and Eco modes do a terrific job of shifting the car’s intent, softening the steering and suspension. It makes for a terrific tourer that’s still ready to launch at the drop of a hat.

The interior of the LC is modern and sophisticated, though decidedly not German. While comparable sport coupes from the likes of Mercedes and Porsche look to mask technology behind heritage and refinement, the LC 500 wears its gizmos and gadgetry like a badge of honor. That said, it would be a crime not to flaunt some of the car’s gizmos and gadgets — just look at the centrally located tachometer, which slides to the right at the touch of a button to expose more screen real estate.

There is slightly too much plastic inside the LC for my taste. It’s unbecoming in a $100,000 vehicle. This might seem odd, but it feels like the cockpit of a car designed for a video game. It’s not necessarily a bad thing, but the dash and appointments simply don’t have the same elegance as a German luxury coupe.

Lexus’s seats in the LC, however, are an entirely different story.

I’ve driven plenty of cars in my day, but I can’t recall the last time I have been more impressed with the driver’s seat in a car in this class. Lexus found the perfect balance of firmness and cushioning for its seats, and they look as impressive as they feel. The sport seats in the example I tested came courtesy of an optional $6,000 Performance Package. Alcantara inserts are flanked by supple leather, and the bottom is molded just right.

Equally impressive is the seat back, which felt as though it was custom-built just for me. The feel was again perfect, and the sides hugged my back in just the right places so as to keep my body perfectly still while I tore around tight curves.

A good seat is important in any sports car, but it’s particularly important in the LC. Why? Because this car handles like an absolute dream. The 4,300-lb curb weight and wide stance glue Lexus’s luxury coupe to the road. Pushed within reason, the LC can hug a curve better than almost any automobile I’ve driven in this class. Pushed beyond reason, the car will still fight with the heart of a lion before the back tires finally relent and begin to lose grip.

Speed is important. Quickness is important. Horsepower and torque are important. But the real fun of driving a sports car is effortlessly zipping around curves and corners. This is where the LC 500 truly shines. It’s a blast to drive.

In nice weather, it’s difficult to travel even a mile or two in parts of Northern New Jersey without passing at least one Ferrari with its top down or a few Bentleys. And yet all eyes seemed to be on the LC as I zipped around during my week with the car. It has such a fantastically aggressive look that is somehow still sleek and refined. The car is stunning.

The LC is also unfamiliar, which adds to the intrigue. People stopped me constantly to talk about the car. A valet playfully threatened to steal it. A man turning through an intersection while I was waiting at a red light actually stopped in the middle of traffic to ask what model I was driving. The Lexus LC 500 is a head-turner in the truest sense of the term.