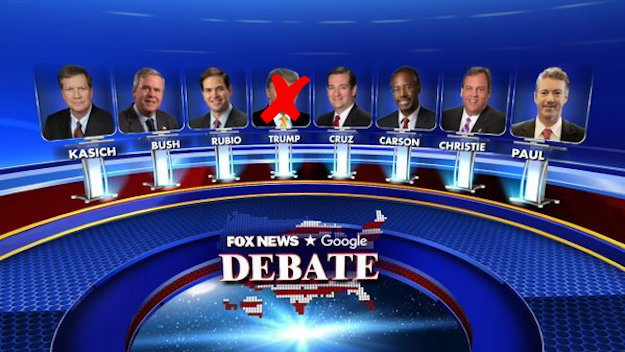 The final Republican debate before the Iowa causes has arrived, but frontrunner Donald Trump is nowhere to found. If you keep up with the news (or even if you don’t), you’ve probably heard by now that Trump decided to boycott the Fox News/Google GOP debate after learning that Fox News anchor Megyn Kelly would once again be a moderator.

READ MORE: Bing’s pre-debate prediction: Trump will win Iowa and all other Republican primaries next month

Unless something changes in the next few hours, Trump will host his own ‘Special Event for Veterans’ at 9 p.m. ET at Drake University in Iowa. As Vox notes, Trump seemed to imply over Twitter that CNN would broadcast his event, but CNN responded to Vox via email claiming that they would only do so if the event offered some form of “news value.”

In other words, it’s probably not airing on CNN.

We’ll be sure to update this post as soon as we can find a stream, but it seems likely that we’re going to have to wait and see if someone at the event brings along a camera crew or even a smartphone and starts streaming live on YouTube.

As Trump prepares for his event, the first debate will air on the Fox News Channel and FoxNews.com at 7 p.m. ET. It will feature Carly Fiorina, Jim Gilmore, Mike Huckabee and Rick Santorum, and The New York Times is reporting that both Huckabee and Santorum are planning to attend Trump’s event immediately following the debate.

That’s right — both the official Republican debate and Trump’s unorthodox event will kick off at the same time. You can watch the Fox News debate free at FoxNews.com, and we’ll embed a video of Trump’s event in this post when/if we find one.