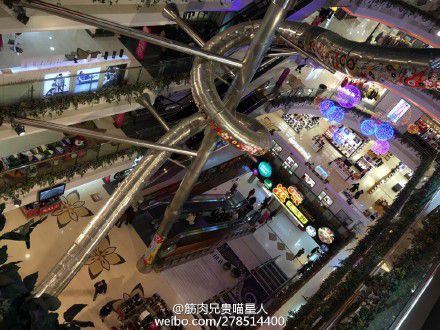 If you ask me, I’d totally go down this five-story indoor slide that was recently installed in a Chinese shopping mall without worrying too much about any safety issues. However, users on China’s most popular social networking platform are going crazy about it over concerns that it’ll actually kill someone.

“What I’m most worried about is that there would be gaps at the entrance and exit,” said one user on Weibo, according to Quartz. “Once your bum rides over it, it would slice it off like a piece of meat.”

“I feel like it will kill people. I’m serious,” the top comment, with over 6,000 upvotes, said in response to the news about the slide.

Are these worries warranted? It appears so. Apparently, shopping mall escalators and amusement parks have killed several people in China lately. According to the tech site, a four-year-old boy was killed in October when he became trapped in the handrail of an escalator while a mother was killed in July when she fell through the floor of an escalator. In May, two people were thrown from an amusement park ride and died, with another sustaining injuries following the accident.

On the other hand, a similar slide is open in a mall in Indonesia, where it has been operating since 2008 without causing any major injuries. But you don’t have to travel to Asia to experience the thrills of such slides. Just visit one of London’s Olympics-related buildings, the Orbit Tower, and you can get a similar experience.