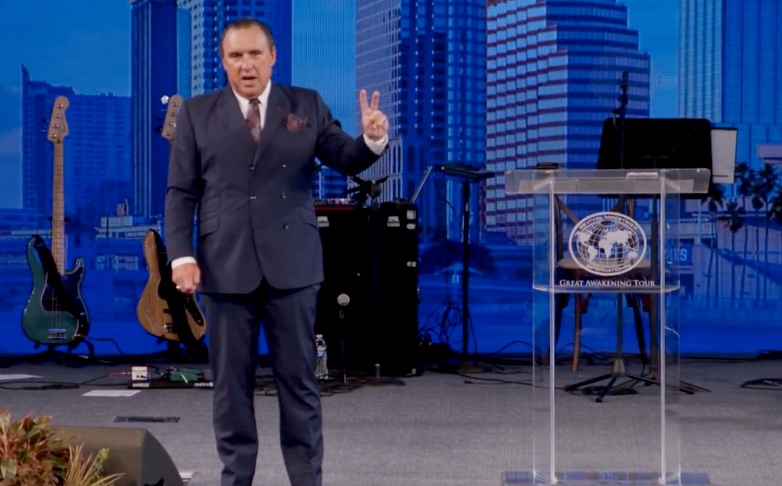 Pastor Rodney Howard-Browne of the River at Tampa Bay Church was arrested this week after holding a church service in front of a large group of worshipers this past Sunday. Howard-Browne’s open disregard for stay-at-home directives is alarming and, without exaggeration, puts every single one of his congregants in danger.

Compounding matters is that Howard-Browne didn’t just hold a regular service this weekend, he went so far as to bus in people from surrounding cities to attend. Not surprisingly, Howard-Browne is a coronavirus conspiracy theorist and fancies himself a “Holy Ghost bartender.”

Howard-Browne led two services on Sunday at his church in Hillsborough county, and videos posted to Facebook over the weekend show hundreds of congregants standing in close proximity to one another, with many standing shoulder-to-shoulder. Hardly a surprise, Howard-Browne a few weeks ago said that he would only be willing to close his church down for the rapture. And going one step further, he added that closing up shop for the coronavirus is for “pansies.”

Because of the reckless disregard of public safety and after repeated requests and warnings, I worked with our state attorney, Andrew Warren, to obtain a warrant for unlawful assembly and violation of public health emergency rules, both of which are second degree misdemeanors. Our goal here is not to stop anyone from worshiping, but the safety and well-being of our community must always come first.

About a week ago, Hillsborough enacted a stay-at-home directive which restricts “public or private gatherings, including community, civic, public leisure, faith-based events, sporting events, concerts, and any similar events that bring together more than 10 people in a single room, single space, or any venue, at the same time.”

Defending his behavior, attorneys for Howard-Browne at Liberty Counsel highlighted the measures undertaken to prevent the coronavirus from spreading:

The pastor’s legal counsel also added that the arrest of their client is “discriminatory against religion and church gatherings.” In any event, Howard-Browne quickly posted bail and was released.