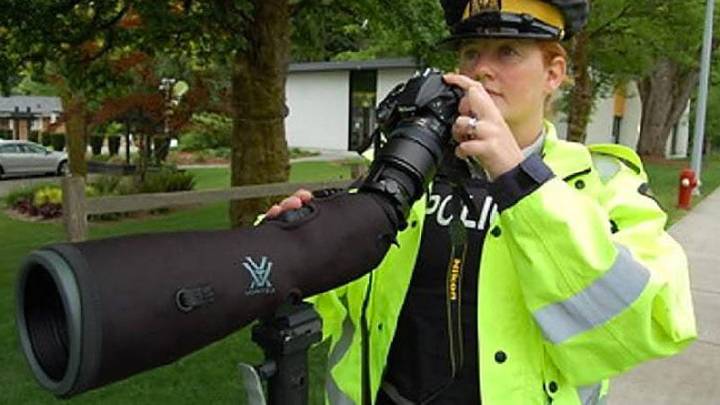 Texting and driving is a menace that’s up there with chugging vodka while at the wheel, and cops the world over are slowly cracking down on it.

But how do you catch errant texters? With a DSLR and some serious glass, if you’re Canada’s Mounties.

A CBC News report spotted by PetaPixel shows RCMP officers in British Columbia using a new set-up to catch drivers who are texting and driving at intersections. The rig consists of a DSLR, a 50mm lens, and a target-shooting spotting scope. It’s a reasonably affordable set of kit — certainly cheaper than a 500mm zoom lens — but it should be good enough to capture photos of offenders from three-quarters of a mile away.

That’s bad news for anyone who likes to drive distracted. Even if you think it’s reasonable to check your phone at a red light, it’s illegal under Canadian law, and the Mounties are coming for your texts.

The good news for distracted drivers is that due to the limitations of the rig (and in general, limitations of trying to photograph a car going at 70mph), it’s only going to work at intersections for now. To catch highway phone users, cops are going to be relying on the old-fashioned Mk. 1 eyeball for now.

Canada’s set-up is the lastest in a list of technology to catch distracted drivers. Legislation was recently introduced in New York state to give cops “textalyzers,” devices that could be used on driver’s phones after a crash to see if they had been using it in the run-up to an accident. A spotting scope is a little more old-school, but nonetheless effective in issuing tickets.