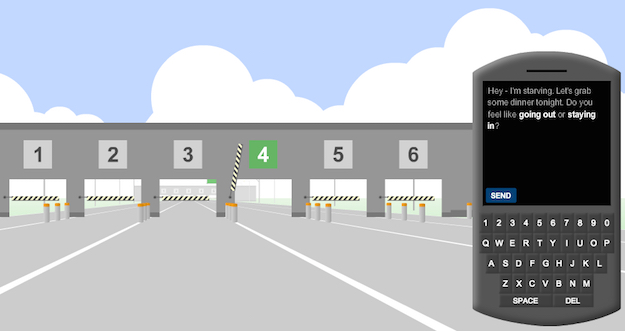 There was a time not too long ago when “Don’t drink and drive” was about the only cautionary advice drivers on the road had to keep in mind. But in 2016, in a world where we’re all addicted if not practically glued to our phones, “Don’t text and drive” is just as important of a warning.

In fact, one could argue that “Don’t text and drive” is a more important message to get out there, if only because many people wrongly assume that they’re nimble enough to respond to a text while successfully keeping their eyes on the road.

Must Watch: Man lights 6,000 matches and the result is mesmerizing

Sadly, the incidence of accidents (some of which are fatal) caused by texting and driving has increased substantially in recent years. In an effort to illustrate how dangerous it is to drive while texting, The New York Times put together a browser-based game intended to show how driving reaction times are affected by texting. The game was initially put online a few years ago but is worth revisiting in case you’ve yet to see it.

“New studies show that drivers overestimate their ability to multitask behind the wheel,” the Times reports. “This game measures how your reaction time is affected by external distractions.”

The game itself is as simple as it is instructive. Players are in control of a car on a multi-lane highway and can use their keyboard to switch to a lane as it lights up. Concurrently, there’s a cellphone on the screen that will periodically display a text message. The goal is to respond to the text message with the mouse while at the same time using your other hand to keep switching between lanes.

Suffice it to say, the game is more challenging than it initially appears. In any event, with intelligent assistants like Siri now more capable than ever, drivers really have no excuse to be texting at any point while behind the wheel.