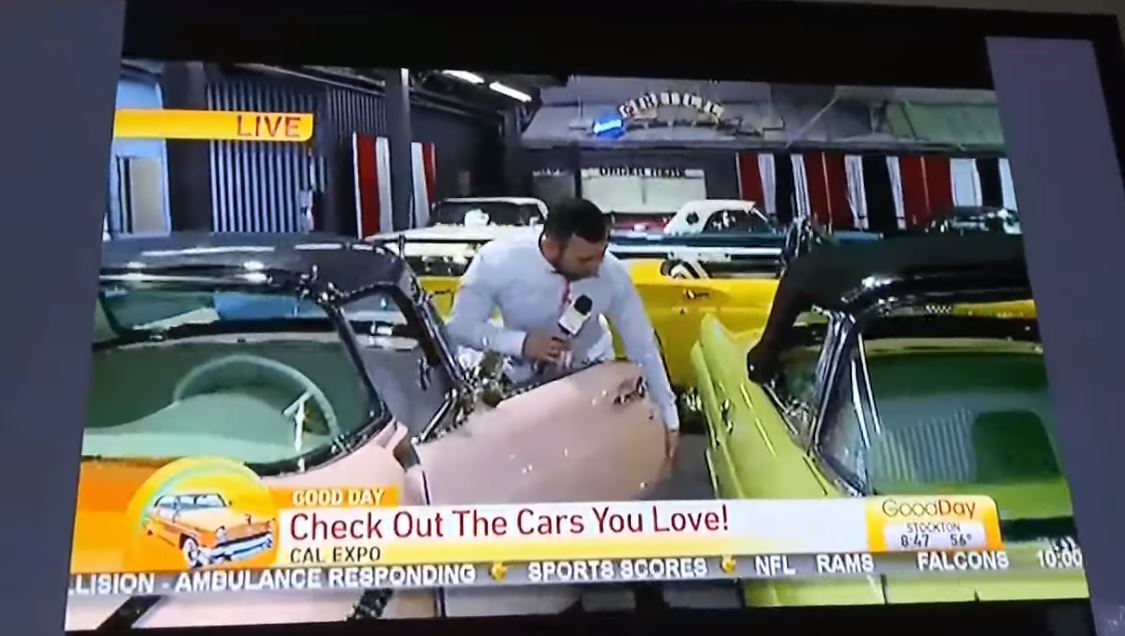 A reporter for a California TV station has been fired after his antics at a local car show crossed some pretty obvious lines. The reporter, Angel Cardenas, was reporting from the Sacramento International Auto Show for CBS 13’s Good Day Sacramento when he decided to do some incredibly dumb things in the name of entertainment.

Cardenas had apparently been allowed into the show grounds well ahead of its opening and, with “no one to talk to” he was forced to come up with something to occupy his time. So, acting like “a kid in a candy store” by his own admission, the reporter started playing around with the pristine antiques.

As you can see in the video, Cardenas starts out by laying across the trunk of an old yellow Thunderbird before moving on to a pink model. As he’s opening the door of the car, the door slams into the door of a nearby green Thunderbird.

If that wasn’t bad enough, Cardenas then moves on to a section of the show floor with new models, zeroing in on some shiny new Fords. After briefly speaking with a Ford representative on camera, the reporter climbs into a blocked-off display area and literally jumps onto the hood of a brand new Ford Explorer.

Someone off-camera had apparently grown tired of the reporter’s antics and told him to get off the car, at which point Cardenas cracks a joke about being “in trouble” and then sends it back to the morning show studio.

It’s hard to imagine what was going through this dude’s head, but it didn’t take long for the news station to ax him.

“This was an isolated incident with a rogue reporter and fortunately neither one of the cars was damaged,” Stacey Bascom, a producer of the auto show, told the Sacramento Bee. “I reached out immediately to the management of the station calling for an apology to all involved in the incident. I received a call from KMAX yesterday and was informed the reporter in question was no longer in their employ.”