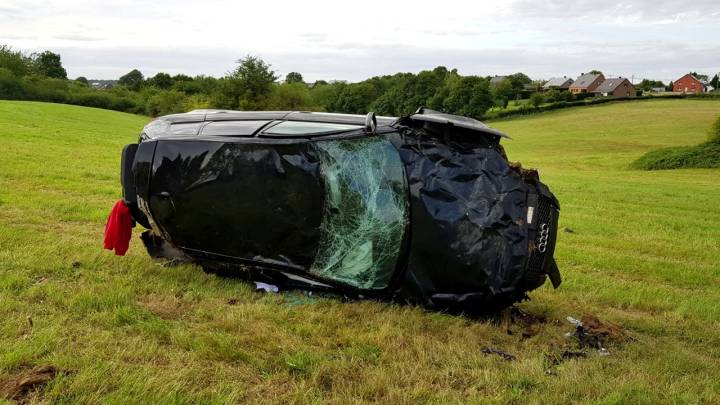 The Russian dashcam genre is well-worn on LiveLeak by this point, so anyone wanting to get their third-person thrills needs to try something new and far more terrifying: watching wannabe race-car drivers go straight off the track at 125 miles per hour.

The car in the video above was driving on the former Chimay Street Circuit in Belgium, a track used for a Grand Prix up until 1972. These days, it’s a public road, explaining all the markings on the street, the passing vehicles, and the lack of safety barriers. Needless to say, you shouldn’t be driving on it at 120mph.

There’s no sudden movement or horrible mistake by the driver, just a total lack of awareness. He’s driving his Audi RS3 along the main straight, but doesn’t seem to know the circuit as he approaches a T junction at full speed. The Stop sign is a nice touch that he completely misses, blowing through the sign and into the field beyond.

As the photos at the end of the video show, the car was destroyed by the impact with the hedge and subsequent rolls. Somehow, the driver walked away unscathed, which is more than you can say for his driving record and dignity.