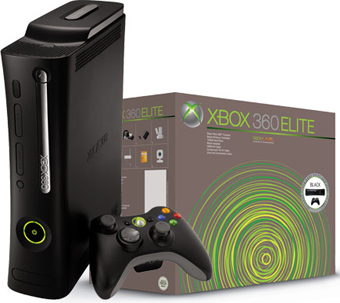 It was only a matter of time, but there are scans of ads coming in from all over the place, and the one at Circuit City is the most compelling. The Xbox 360 Premium is dropping by $50 (to $349), and represents the best value because of the included 20GB hard drive, headset, and wireless controller, and a free copy of Rockstar’s Table Tennis. The Core is dropping a measly $20 (to $279), and has no hard drive and a wired controller.  And before you start wondering if that means you could make a cheap Elite by adding the 120GB hard drive, We’ve already done the math. The Elite comes down $30 to $449, putting it just under the $458 it would cost to add the 120GB drive to the Core. Plus, you’d get the black paint job, HDMI port, and if reports by Ben Heck and Gizmodo are true, newer heatsinks to ward off the dreaded “Three Red Lights of Death”. That $179 would probably be better spend on the HD DVD add-on, which just got its own $20 price cut, assuming you don’t mind the sound of a jet aircraft taxiing the runway in your living room. And We’re not talking about Con Air or Top Gun.

The last bit of information that has been missing is … when? That was confirmed this morning, when a leaked GameStop e-mail shows that signage from Microsoft “supporting an upcoming announcement” is not to be displayed until August 8th.  It’s unlikely that Microsoft would have signage prepared that would be time-limited for anything other that a price drop or a major hardware revision.

Microsoft is still mum on the price cut, and that’s where I have to take issue. We’ve seen this before…Microsoft wants to control the story so that they don’t cannibalize sales before the price cut kicks in. Unfortunately, you can’t put the cat back in the can, nor the worms back in the bag. I’d have turned this into an opportunity…highlight that new three-year warranty, and talk about how you can get all of the game experiences offered by the Xbox 360 for less, and be secure in that purchase with the updated warranty. Start repairing that brand image by being more forthcoming with the information we already know is out there. Lead the charge, waving that three-year warranty flag, and the masses will follow the Pied Piper anywhere.

Of course, what do I know?  I missed the mark on two of my three Xbox 360 price predictions, though we nailed the price on the Premium. And arguably, I did better than Pachter, who was WAY off.