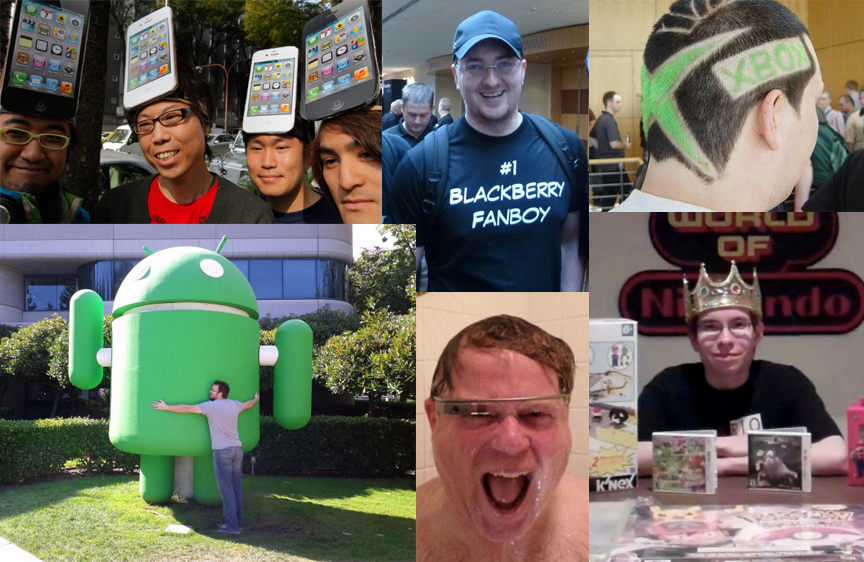 To steal from an old Chris Rock joke: “I love tech fans but I hate fanboys.” What I mean is that I think it’s great if you have a favorite brand or company that you’re enthusiastic about. However, it’s not-so-great if your love of that brand turns into an insane religious devotion that leads you to lash out angrily at even the slightest criticism of it. The absolute worst tech fanboys remind me a lot of the ridiculous Beliebers who posted hilarious messages defending Justin Bieber even after he was arrested for drag racing while intoxicated… except the difference is most of those people at least have the excuse of being 12-year-old girls and aren’t supposedly grown-up men.

In this post I’ll go through what I think are the five worst kinds of tech fanboys around. If you’re a tech enthusiast who actually has a sense of humor about your favorite gadgets and you don’t take technology entirely too seriously, then don’t worry — I’m not making fun of you. This is only for the hardest of the hardcore, the sort of people who will post incessantly in BGR’s comment sections all day to defend their favorite brands from all manner of haters.

But before I get into this, I’d like to give a shout-out to the best fanboys in the entire world: The HP fanboys. Why are they the best? Because in all my years of writing about technology, I have still never met one.

And now without any further ado, let’s get started.

No. 5: The Cult of Dead Technology Fanboys. Every single time you make a passing remark about some long-ago nearly-forgotten technology, it seems like there will be at least one fanboy who will pop up and say that you shouldn’t make fun of it because it was really the best thing in the world. Examples of this include fans of the Sega Dreamcast, Palm’s webOS mobile platform, Microsoft’s Zune MP3 player and, yes, Betamax.

These sorts of fanboys think of tech companies as misunderstood artists: If the public rejects their work it’s because the public is too stupid understand their brilliance. In reality, tech executives aren’t Picasso, Joyce or Schoenberg — they’re guys who are trying to make a buck by getting you to buy their product. Steve Ballmer didn’t go somewhere to smoke cloves and write sensitive poetry after the Zune got discontinued — instead he probably threw a chair at something and moved on with his life, just like everyone else should have done.

No. 4: Google Glass Fanboys Who Insist That They Should Be Allowed To Drive While Wearing Glass. In theory I’m not opposed to someone driving with Glass on… if Google in the future develops a “driving mode” that can detect when you’re in a car and will only grant you access to navigation apps.

Don’t tell that to the hardcore Glass fanboys, though. They’ll insist that there’s nothing wrong with driving while wearing Glass and will back up this claim with the absolute lamest defense in the entire world: That Glass is less distracting to look at while driving than looking at a smartphone. Well gee-whiz, Mr. Spaceman, I’m pretty sure no one thinks it should be legal to stare at your phone while driving either, hence all those don’t-text-while-driving laws that have popped up around this fine land of ours. In the meantime, I think you can sacrifice having your precious digital headset strapped to your face for at least a short amount of time, don’t you?

No. 3: PC Gamers Who Say You’re Not A “Real Gamer” If You Play On A Console. Ugh. These cretins. Look, I get that PC gaming provides a superior experience overall to console gaming. But I don’t care.

Why? Because PC gaming is also a hassle. First, buying a good gaming PC will probably cost you somewhere north of $1,000. Second, there’s still no guarantee that the most cutting-edge games you get will work right out of the box when you buy them. Every time I hang out at gaming forums discussing some hot new game that’s coming out for the PS4 or the Xbox One, I see a PC gamer lament that it “looks like they’ll have to buy a new graphics card.”

You know who doesn’t have to buy new graphics cards, update their drivers or do any of the other annoying things that come with PC gaming? That’s right, those filthy console gamers whom you insist are “ruining gaming” by promoting “dumbed-down button-mashers.” So fiddle with your drivers all you want, PC gamers. I’ll happily spend less money to buy something that will just let me play my games, thank you very much.

No. 2: The “You-Can’t-Use-That-To-Do-Real-Work” Fanboys. These are the sorts of fanboys who think a piece of technology is worthless unless you can use it for “real work.” They’re typically Microsoft or BlackBerry diehards who like to snicker at all the “iSheep” who are blowing all their hard-earned money on “toys” such as the iPhone or iPad. Then when sales figures come in and they see that millions of people actually do want these supposed toys even as no one is buying a BlackBerry anymore, they turn into balls of sputtering rage and lash out at the wicked consumers who don’t understand the value of having a tool that helps them do “real work.”

There are two things that make this attitude annoying. In the first place, lots of people actually do use iOS and Android-based smartphones and tablets for “real work.” The iPad in particular has dominated corporate tablet sales so we’ll have to assume that companies that buy it have found some real uses for it. Second, what is wrong with having a toy? Toys are fun. They make our lives more enjoyable. They let us enjoy the wonders of computing without having Microsoft Office installed. Let us enjoy our toys!

So yes, the Apple-hating “you-can’t-use-that-to-do-real-work” fanboys are some of the most annoying ones around. However, there’s still one group that outdoes them by far. And that is…

No. 1: Apple Fanboys Who Pity You For Using Non-Apple Products. I find the cult of hatred surrounding Apple to be ridiculous but I understand why it exists: Because the most diehard Apple fanboys are the single most insufferable in all of tech. Their most annoying trait is to insist that you don’t really like the non-Apple products you’re using and will then argue that you only bought it because it was cheaper, or because you “just want to be different” or because you’re just an ideological Apple hater who despises perfection.

The other hallmark of the hardcore Apple fanboy is that they can’t even be bothered to look at non-Apple products and will insist that Apple has nothing to learn from other companies, even when it’s blatantly following others’ lead. They’ll mock Samsung for releasing giant-sized phablets that don’t fit snugly into the palm of your hand like the iPhone does… until, of course, Apple releases its own giant-sized iPhone, at which point they’ll laud Apple for its bold risk-taking innovation. Apple fanboys pulled then same trick when they followed along with Steve Jobs’ belief that consumers didn’t really want smaller-sized tablets… until Apple released the iPad mini, at which point everyone wanted smaller-sized tablets.

These poor saps will swallow any pile of crap that Apple gives them and will even insist that notorious turds such as Apple Maps are just “misunderstood,” as if it’s the user’s fault when they’re erroneously directed into an Australian outback death trap. But getting actual correct data isn’t as important to the hardcore Apple diehards as long as the map itself looks pretty… or at least as long as Apple tells them the map looks pretty, which is basically all it takes to get the most hardcore Apple diehards to believe anything.