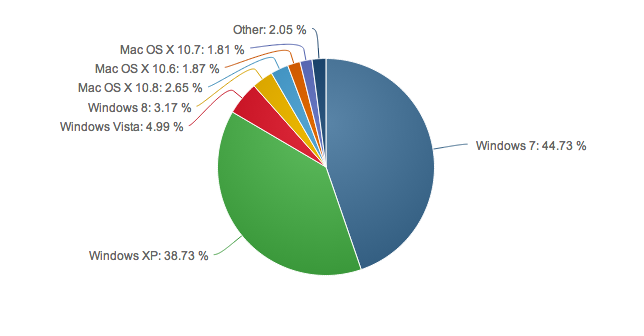 The latest numbers from Net Applications show that Microsoft’s (MSFT) Windows 8 operating system is slowly gaining traction. The company’s latest operating system is now found on 3.17% of computers, a small increase from February’s 2.67% share. Windows 8 was released last October and has gradually increased its market share over the past five months. The operating system experienced its biggest jump in market share following the holiday season, growing from 1.72% in December to a 2.26% share in January. Despite the small gains, however, Windows 8 remains less used than previous Windows releases.

Windows 7 continues to lead with a 44.73% share of the market, although its growth has taken a hit since the release of Windows 8, while Windows XP trails close behind with a 38.73% share. Even the widely panned release of Windows Vista still leads Microsoft’s latest operating system with a 4.99% share of the market. Windows 8 is expected to surpass Vista in the coming months, though.

As a whole, Microsoft controls 91% of the desktop operating system market, ahead of Mac OS X’s share of 6.94% and Linux’s distant 1.17% share.