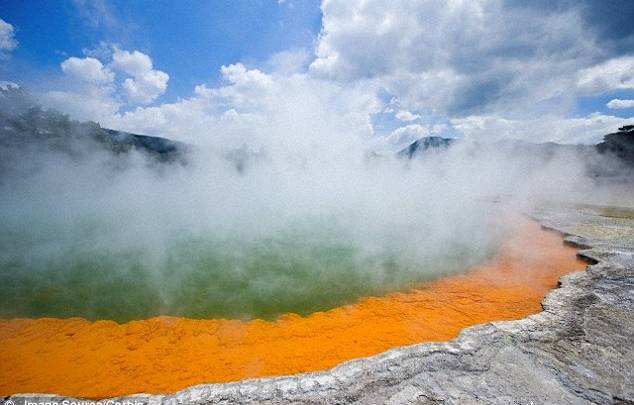 The heat is on for prospectors in what could be the next gold rush. According to a recent study in the journal Geothermics, a team of geologists has discovered a mother lode of gold and silver inside super-heated reservoirs within New Zealand’s Taupo Volcanic Zone. Extreme heat from the volcanoes’ magma plumes is heating water, producing acidic underground reservoirs and springs that in turn dissolve the surrounding rock. This then allows the embedded gold and silver to come loose and collect in the water. If successfully drilled, one well could yield as much as $2.7 million in gold a year.

According to lead study author Stuart Simmons, a research professor at the University of Utah’s Energy & Geoscience Institute, gold and silver depositing in hot springs and geothermal wells is nothing new. Apparently this was first discovered over 50 years ago, with New Zealand’s ‘Champagne Pool’ hot spring one of the only places in the world where tourists can actually see this phenomenon happen.

“If you Google ‘Champagne Pool’ online, you will see photos of the striking orange-colored precipitates that deposit around the edge of the pool,” Simmons told FoxNews.com. “Those precipitates are rich in gold, silver, mercury, thallium, arsenic and antimony.”

Related: What the animal world would look like if humans never existed

The road to this new discovery began 15 years ago, when Simmons and a colleague constructed a special device to lower down wells up to 1.8 miles deep, obtaining hot samples of thermal water to determine the concentration of precious minerals.

“After about 5 years, we had some preliminary data on which to make assessments of the amounts of precious metals that might be available,” he recalled. Their work paid off, with the amounts of aqueous gold and silver found in the 18 reservoirs estimated to be tens of thousands of ounces of gold and hundreds of thousands of ounces or more of silver. Now, all they need to do is figure out a way to mine it, which is no easy task considering new equipment would have to be developed that could take the heat (the chloride-rich waters in the underground reservoirs can get as hot as 752 degrees Fahrenheit) and also ensure lasting production.

“It is not really practical to mine gold and silver in a traditional sense inside the geothermal areas,” Simmons said. “Hot boiling water would be encountered in shallow excavations and there would be considerable environmental impact to deal with.”

He explained that there currently isn’t much interest in figuring out ways to mine the minerals since it would disrupt energy production, what with the wells being drilled for steam to power turbines and generate electricity. One solution that was proposed in the study was to mine the reservoirs in intervals after enough gold and silver had accumulated so as to make the disuse of the steam-field worthwhile.

“The more practical thing to do is to attempt to extract the metals from the fluids as they flow through the [existing] surface pipe work,” he said. “The gold and silver are passively accumulating in the shallow parts of the wells and in surface pipe work, so it is not lost.”

So if the new tech is developed, who will reap the financial benefits? Not the researchers who made the discovery – they were in it strictly for the science, according to Simmons.

“The team did the work mainly to get a better understanding of processes of gold and silver deposition in ancient hydrothermal systems that are no longer active but that are host to ore deposits,” he said. “There are many such deposits forming mines and prospects around the Pacific Rim (Japan, Philippines, Indonesia, Papua New Guinea, New Zealand, Chile, Peru, Ecuador, Mexico, and the western US). So the aim was to apply our understanding to new discoveries.”

Simmons worked in conjunction with his colleagues at the University of Auckland, New Zealand on the study.