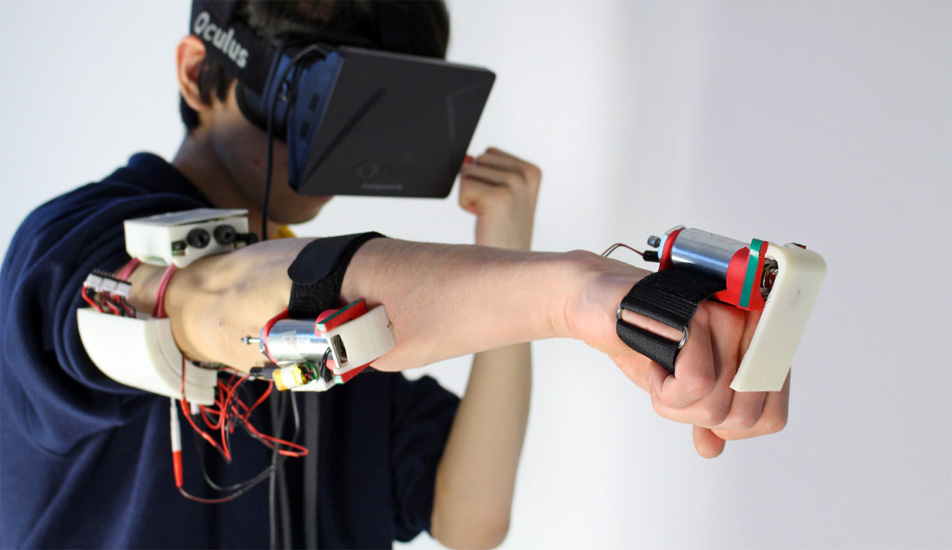 Virtual reality has been a long time coming, but the most notable strides have come in the past few years. Oculus has led a revitalization in VR tech, the development of which had slowed significantly over the preceding decade. Now, a resurgence in consumer VR products has resulted in great strides, and affordable virtual reality kits like the Samsung Gear VR make virtual reality accessible to nearly anyone.

But there’s still one key piece missing from the virtual reality puzzle that prevents the user from being truly immersed in a VR experience. That may soon change, however, thanks to work being done by researchers in Germany.

A team of researchers from the Human-Computer Interaction (HCI) lab at Germany’s Hasso Plattner Institute have created working prototypes of a device they call Impacto. The device is integrated into a band that can be worn on the arm, leg or foot of a virtual reality user. When combined with a VR experience that incorporates the HCI researchers’ special software, Impacto simulates contact on the wearer so that he or she can actually feel objects virtual reality. At least, to an extent.

Of note, Impacto isn’t a simple vibrate motor shoved into a plastic box. The device combines a haptic vibration engine with electrical muscle stimulation to actually create a sensation of pushing or pulling, therefore more closely mimicking the feeling of contact from actual physical objects.

“The key idea that allows the small and light impacto device to simulate a strong hit is that it decomposes the stimulus: it renders the tactile aspect of being hit by tapping the skin using a solenoid; it adds impact to the hit by thrusting the user’s arm backwards using electrical muscle stimulation,” the team, led by Pedro Lopes, said in an abstract covering its research paper on Impacto. “The device is self-contained, wireless, and small enough for wearable use, thus leaves the user unencumbered and able to walk around freely in a virtual environment. The device is of generic shape, allowing it to also be worn on legs, so as to enhance the experience of kicking, or merged into props, such as a baseball bat.”

Here’s a video of the HCI team’s Impacto prototype in action:

Use cases for Impacto are limited for the time being due to the device’s shape and size, but it’s entirely possible to use the same technology in both smaller and larger devices. As a result, different Impacto modules could be combined to form a suit of sorts that would give the wearer multiple contact points. So, rather than only being able to feel a jab to the arm or a soccer ball bouncing off of a foot, VR users might feel contact from VR objects all over their bodies. The team said that already has plans to create new Impacto modules for the abdominal region and shoulders.