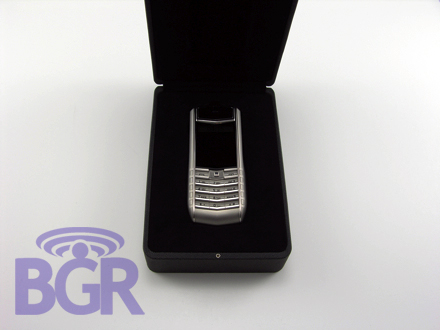 We can already see the commenters going wild. “Why pay so much money when I can get a $100 Nokia that does the same thing,” right? Well, you’re going to have a tougher battle with the new Vertu Ascent Ti because it comes loaded. From a 3 megapixel auto focus camera with LED flash, to quad-band GSM/EDGE connectivity and a WCDMA 2100MHz band, to almost every single Bluetooth profile you could dream of, the Vertu line no longer lacks features found in many other handsets. But let’s be real; you don’t buy a Vertu because of the camera or the features, you buy it because of the craftsmanship, and the the exclusivity of the phone. Just like we could make the same argument about watches. Why buy an Audemars or a Patek over a Timex? They both tell time, right? Other features include the complimentary Concierge service, but then again, if you’re buying a Vertu, you probably already have a couple assistants and a secretary. Overall, we’re loving the Ti! The build quality and materials used are the best you can get on a mobile phone and the voice quality — you really need to hear it — is unbelievable. Now if Vertu only made a QWERTY BlackBerry device…

UPDATE: Forgot to add the Fortress application in! It syncs all your phone info OTA to an ex-military underground bunker in Britain. Totally gangsta!

Click on over to our Vertu Ascent Ti hands-on gallery!