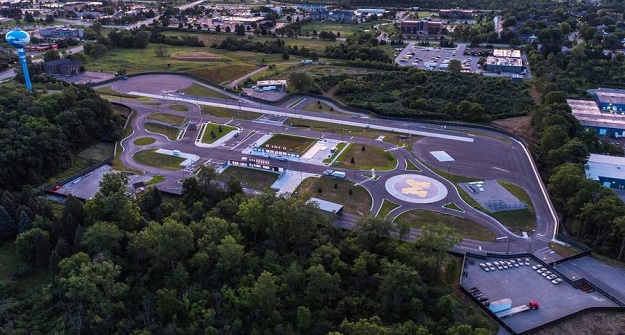 Tesla and Google aren’t the only companies aggressively exploring autonomous driving technologies. Earlier this week, a simulated 32 acre city opened up on the University of Michigan’s Ann Arbor campus. The fake city, so to speak, was developed in conjunction with automakers, a slew of tech companies, and the Michigan Department of Transportation.

The goal? To test automated and connected cars in real world conditions.

DON’T MISS: What it’s like to eat at Chipotle every day for 106 days straight

The simulated city itself is almost something you’d see in The Walking Dead.

There are no live pedestrians roaming around, but there are no shortage of road signs (some of which have been marked with graffiti for added realism), stop lights, construction barrels, roundabouts, and even varying types of road surfaces. Of course, in an effort to make the city as realistic as possible, there are cardboard pedestrians which will pop up at random times and mechanized bikes zipping about town.

A press release from the University of Michigan this summer reads in part:

The test environment… will model the kind of connected and automated mobility system that the center aims to enable in Ann Arbor by 2021.

Such a system could dramatically reduce crashes, ease traffic and reduce pollution and energy use. It would involve vehicles that communicate with each other and the world around them, rather than operating as autonomous “islands unto themselves,” Sweatman said.

“We will actually be writing code for the test facility,” said Edwin Olson, an assistant professor of computer science and engineering. “We’ll be able to trigger tricky traffic signal timings, or a pedestrian stepping into the intersection at just the wrong time, for example.”

The sheer number of talented researchers and companies who are actively working to bring self driving cars into the mainstream is truly astounding. While once something only dreamed about in science fiction novels, smart and connected cars may become a reality sooner than anyone could have imagined even 5 years ago.