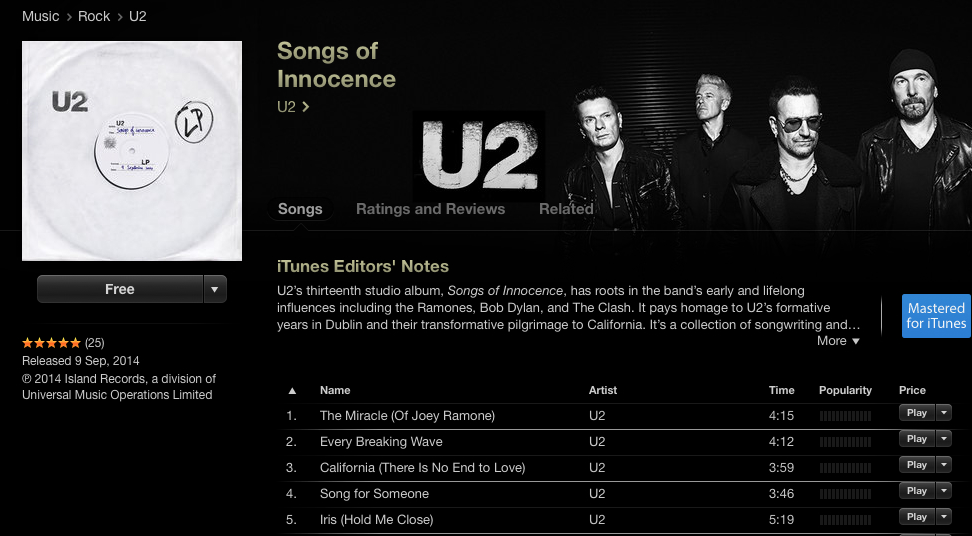 On September 9th, 2014, Apple revealed several new exciting products and services, including the iPhone 6 and the Apple Watch, but what was supposed to be a fun surprise at the end of the event turned into a baffling debacle. The surprise was that U2’s new album, Songs of Innocence, had been automatically stored on everyone’s iTunes account free of charge. Over a month later, Bono has finally apologized for this inconvenience.

In a recent interview session for Facebook, all four members of U2 gathered together and asked each other questions from their fans. Most of the questions are fairly innocuous, but one perturbed iTunes user had a chance to ask Bono to never give her a free album again:

“Can you please never release an album on iTunes that automatically downloads to peoples [sic] playlists ever again? It’s really rude.”

The other band members look bemused, but Bono seems to take the question seriously:

“Oops. I’m sorry about that,” he begins. “I had this beautiful idea. Might have gotten carried away with ourselves. Artists are prone to that kind of thing. A drop of megalomania, a touch of generosity, a dash of self-promotion and deep fear that these songs that we poured our life into over the past few years might not be heard. There’s a lot of noise out there. I get we got a little noisy ourselves to get through it.”

Happy, everyone? Bono is sorry he gave you all a free album. You win. Watch the full video interview in the source link below.