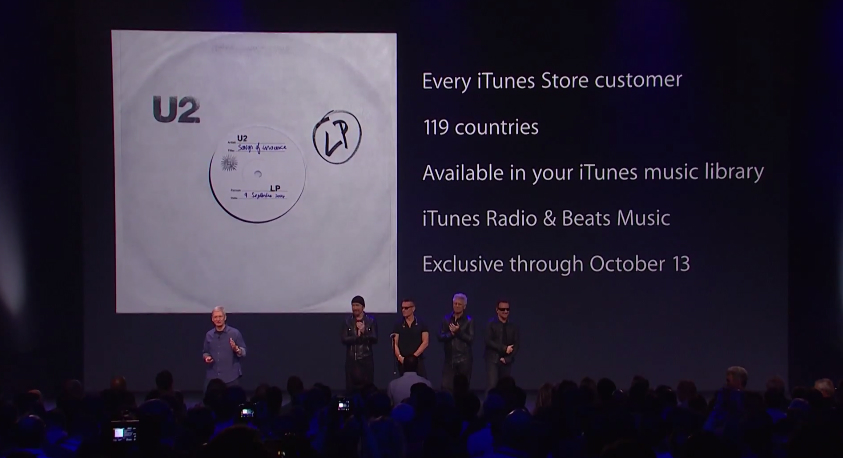 As rumored in the days preceding the Apple’s iPhone 6 event, U2 made an appearance at the highly anticipated keynote not only to perform, but also to announce that its latest album will be available as a free download to all iTunes users until October 13. What Apple didn’t specifically say is that it’ll force the download on all iOS devices – at least sort of – soon after the announcement, although in Tim Cook’s conversation with Bono, the CEO said that Apple could send the album to all of its iTunes subscribers, if “it gave it away for free,” thus making it the largest album release of all time.

FROM EARLIER: The secret reason Apple is giving U2’s album away for free… and how to get it

Before the event, it was rumored that U2’s Songs of Innocence will be preloaded on all iPhone 6 models, but that wasn’t accurate, as it turned out everyone with an iTunes account is able to download the album regardless of whether they own any iOS devices or not.

As revealed during Cook’s on-stage talk with Bono, Apple has pushed the album to everyone’s iTunes accounts, and depending on individual iCloud settings, the album may have automatically downloaded on may iPhones, iPads and iPods even though owners might not actually be U2 fans – apparently this caused quite a stir online, as people found the free download on their devices. On the other hand, U2 fans should be thrilled to see the band’s latest tracks automatically appear on their devices.

Why is Apple doing this? Well, on its website, the company is advertising “a big moment in music history,” saying that “you’re part of it.” “Apple and U2 are giving the new album Songs of Innocence to over 500 million iTunes customers worldwide,” Apple further says on its page further reinforcing what it said on stage during the event. So to reach that number, Apple decided to make the album appear in all these iTunes accounts automatically. Because iCloud is tied to iTunes, it shouldn’t be a surprise seeing the album automatically download.

When digging deeper for more information about this new Apple and U2 partnership on the company’s website, you’ll discover that “your album is already in your library, waiting for you to download,” as Apple tells you it has pushed it to all iTunes accounts. That, however, shouldn’t be surprising to anybody who has seen the iPhone 6 event live, as Cook said on stage the album will be available in every iTunes music library in 119 countries (see image above and video below).

On the other hand, considering the recent iCloud-related scandal, which Apple didn’t even address during the iPhone 6 event, this goes to prove that Apple can do lots of things with its iCloud product, whether you like it or not, and they have to be even better explained to regular iOS users.

You can check out Cook and Bono’s conversation following U2’s performance at the iPhone 6 event below.