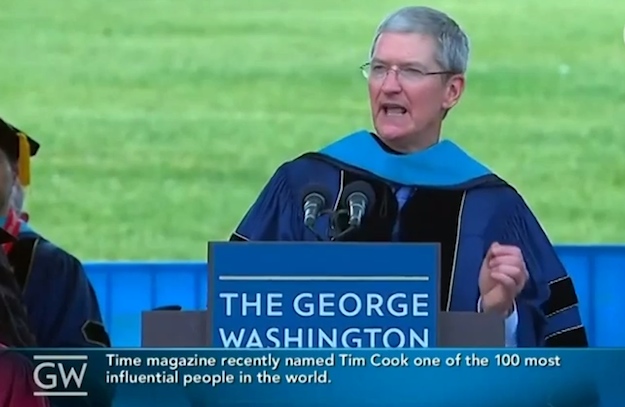 Over the weekend, Tim Cook was the keynote speaker at the George Washington University graduation. In typical fashion, the bulk of Cook’s speech focused on broad and important themes such as equality, social change, civil rights, and correcting injustices where and whenever it arises.

“Sidelines are not where you want to live your life, Cook said. “The world needs you in the arena. There are problems that need to be solved. Injustices that need to be ended. People that are still being persecuted.”

But before Cook got into the meat and potatoes of an otherwise inspiring speech, he couldn’t help but have a little but of fun at the expense of anyone in the crowd who just so happened to be carrying a non-iPhone smartphone, which in this day and age pretty much means Android and Windows Phones (sorry BlackBerry).

“Before I begin today,” Cook began, “they asked me to make a standard announcement about silencing your phones. Those of you with an iPhone, just place it in silent mode. If you don’t have an iPhone, please pass it to the center aisle,” Cook continued, “Apple has a world-class recycling program.”

Here’s a short clip with the zinger above:

And here’s a video that shows Cook’s full speech: