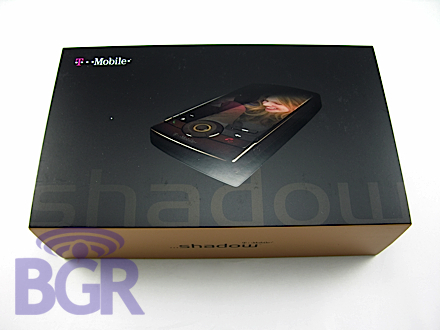 We’ll save you the gloating about how we did this first, and leaked this, and reported that before anyone, let’s just get to the damn device already! The T-Mobile Shadow is officially available today, and here are a couple of our first immediate impressions from the unit…It’s extremely small, and dare we say, fun to use? The scroll wheel takes a little getting used to and it doesn’t behave how you’d think. Each click on the scroll wheel isn’t a “click”, you have to scroll the wheel almost 1/4 of the way to register a response. In addition to being the scroll wheel it is also a four-way navigational pad that helps when you want to zip through things instead of messing around pulling “wheelies.” The T-Mobile Shadow features one of the best displays we’ve seen on a Windows Mobile device — so crisp and bright — totally hot! There’s a new homescreen UI on here, and basically what it does is simplify the most commonly used applications and functions to the main page of the phone. You can shoot off a text message, browse the web, connect to Wi-Fi, and more all with a few “scrolls” or clicks. The only major drawback to this device is that once you’re used to 3G, it is pretty hard to go back. But, if you’re riding it out on T-Mobile and want something a little more fun, you can’t beat the Shadow for only $149. Check out some snaps in our gallery!

Click on over to our T-Mobile Shadow Unboxing gallery!