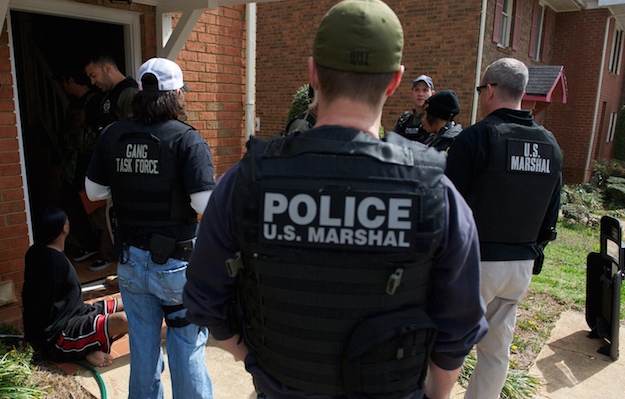 A new report from the USA Today details how U.S. Federal Marshals have been using advanced surveillance technology to secretly listen in on phone conversations and track nearly 6,000 criminal suspects.

Their tool of choice? The Stingray.

As we detailed late last year, the Stingray is just one of many tools that government agencies can and have used to listen in on conversations, jam cellphones, and even track the location of specific individuals.

The way a Stingray works is quite simple and clever. The device is able to masquerade as a cell tower from various carriers and force cellphones within a 200 meter radius to connect to it. Once a cellphone is in communication with the Stingray, the device is able to extract data, intercept communications and even track a user’s location. And speaking to how powerful and advanced Singrays are, they even have the ability to force a connected phone to “broadcast at full power for greater surveillance potential.”

Over the past few years, government agencies – from the FBI to local police forces – have been doing their best to keep their use of Stingrays a secret. In fact, some governmental agencies have at various times let suspects walk rather than risk going to trial and revealing information about their surveillance techniques.

As for the U.S. Marshals Service using Stingrays, the agency – which is normally tasked with apprehending fugitives and sex offenders – didn’t reveal too much information aside from confirming that they do in fact deploy Stingrays to keep tabs on suspects.

In a highly redacted spreadsheet handed over by the U.S. Marshals Service in response to a Freedom of Information request, there are nearly 6,000 separate entries detailing instances when Marshals used Stingrays.

The Marshals Service’s response to that request included an almost totally censored spreadsheet listing its stingray cases, with information about the cases stripped out line by line, which made it possible to count the number of entries the agency had made on its log of stingray uses.

While the 5,975 figure may not mean much out of context, the report provides some information that really highlights how extensively the U.S. Marshals Service has used Stingrays. For instance, the NYPD over the last eight years has used Stingrays approximately 1,000 times.

Naturally, the Marshals Service doesn’t make a point of informing captured suspects that Stingrays were used in their capture. To this point, the agency says that they only reveal such information when a court orders them to do so.

For as much as people talk about surveillance as it pertains to the NSA, it’s easy to forget that there are many more agencies out there using covert methods to track and keep tabs on people.