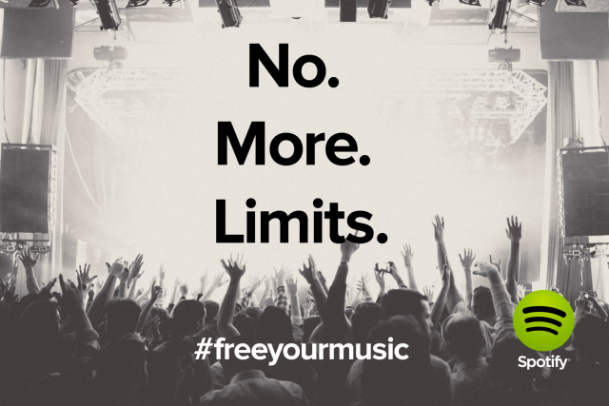 Spotify on Wednesday announced that its lifting all limitations from its free desktop version, allowing users in all countries where the service is available to listen to music for as long as they want, and play their favorite songs for as many time as they want. “In the past, we had to restrict your listening time to some hours a month once a 6-month unlimited grace period had passed,” Spotify writes. “But now, if you haven’t noticed, there’s no more time limit if you are using Spotify for free.” The free version will still serve ads in between songs, while the paid Spotify Premium version will remove ads and offer other perks such as track downloads and better audio.

Spotify’s move may affect various competing music services including Rdio, Pandora, and others, and comes days before the Beats Music arrival, a subscription music service that’s launching on January 21 with an exclusive AT&T partnership in the U.S. For $14.99 per month, Beats Music will let a family of up to five users stream music to several devices. However, Beats Music will not have a free-only version to match Spotify’s offer.