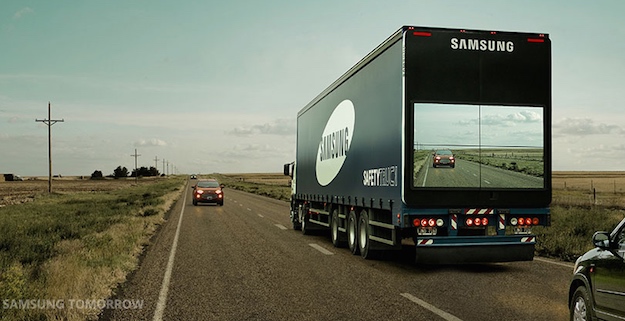 Well this is downright clever. Samsung is developing a ‘see through’ truck that will enable vehicles traveling behind large trucks to see what the traffic in the opposite lane is like in real-time. This is accomplished by fitting trucks with a night-vision enabled and wireless video camera in the front and transmitting the footage to a large display on the back. The underlying goal is to help drivers keen on passing slow moving trucks make more informed decisions in moments where a rash decision could prove deadly.

This clever implementation of technology could prove especially useful in countries with a disproportionately large number of traffic accidents, such as Argentina. There, Samsung notes, many accidents occur “on two-lane roads and particularly in situations of overtaking.”

As for how the contraption works, Samsung describes it as follows:

The Safety Truck consists of a wireless camera attached to the front of the truck, which is connected to a video wall made out of four exterior monitors located on the back of the truck. The monitors give drivers behind the truck a view of what is going on ahead, even in the dark of night.

This allows drivers to have a better view when deciding whether it is safe to overtake. Another advantage of the Safety Truck is that it may reduce the risk of accidents caused by sudden braking or animals crossing the road.

Samsung has already built one prototype which it says worked well. Though not currently operational, Samsung writes that the “next step is to perform the corresponding tests in order to comply with the existing national protocols and obtain the necessary permits and approvals.” To move forward in this regard, Samsung has established open lines of communications with safe driving NGOs along with various governmental agencies.

A video showcasing the technology in action can be seen below.