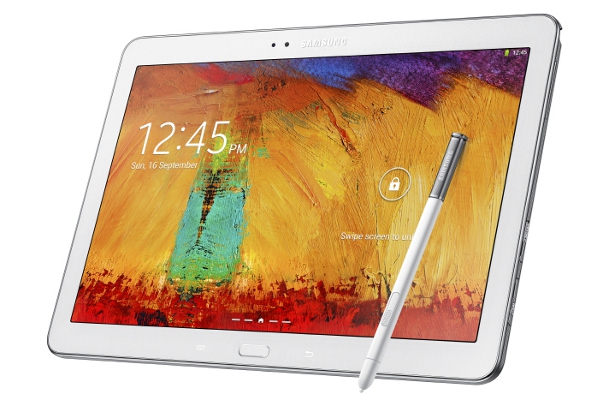 Samsung followed up its Galaxy Note 3 and Galaxy Gear reveals with the announcement of a revision of the 10.1 inch tablet, dubbed the Galaxy Note 10.1 2014 Edition. Samsung’s new Note 10.1 will feature a 2560×1600 WQXGA display will feature 3GB of RAM and an 8 megapixel camera. The Note 10.1 is just 7.99 millimeters thick and weighs either 535 grams or 545 grams depending on whether you pick up the Wi-Fi or the 3G model. It will also sync with the Galaxy Gear, much like the Note 3. The revised Galaxy tablet will release alongside the Gear and the Note 3 on September 25th. Samsung’s full press release follows below.

“The new GALAXY Note 10.1 is the most progressive 10-inch tablet, delivering the best viewing and multitasking experiences. It is the most recent demonstration of Samsung Mobile’s focus on constant product innovation to stay aligned with shifting consumer interests,” said JK Shin, CEO and President of IT & Mobile Division at Samsung Electronics. “The GALAXY Note 10.1 (2014 Edition) unites a range of features that will consistently surprise consumers as they realize how much easier and more enjoyable it makes their everyday lives.”

The new GALAXY Note 10.1 expands on the advanced productivity and creativity leadership delivered by the original Samsung GALAXY Note 10.1. In addition to enabling productivity, the device has been redesigned with a sleek, light, slim frame that is both fashionable and portable.

The large, bright and crystal clear screen delivers four times the pixel density of the original GALAXY Note 10.1, providing a premium content viewing experience. The magazine style UX allows users to organize their favorite resources in an easy to use dashboard and then access that content for a stylish reading experience. Whether watching videos or reading magazines and e-books, the new GALAXY Note 10.1 provides an immersive media consumption experience. New design characteristics, like a warm and textured back cover with stitching, inspire a sense of elegance.

The device’s screen size also enables enhanced multitasking. With Multi Window, users will be able to run separate instances of the same application, and use an enhanced S Pen to drag and drop content from one window to another. Pen Window enables users to simply draw a window of any size on the screen, and instantly access unique in-application features such as YouTube or calculator.

S Note has been upgraded with a more intuitive, easy-to-use interface. Users will have access to both note files and notepads, with the ability to use the S Pen to take handwritten notes. With Easy Chart, hand-drawn visualizations of data can be instantly transformed into more formal charts and graphs.

The new GALAXY Note 10.1 will also offer a host of exciting partner content that complements the device’s entertainment, productivity and creativity properties. With premium partner applications and free memberships and services, the new GALAXY Note 10.1 provides everything a user might need in one place. The Samsung Content Gifts include content from leading news sources such as Bloomberg Businessweek+, The New York Times, Autodesk Sketchbook for GALAXY for painting and sketching, a redesigned version of social broadcast network Twitter optimized for the device, and much more.

In addition, the GALAXY Note 10.1 (2014 Edition) will also include a Samsung Apps widget that will direct users to additional beneficial content provided by Samsung. The widget will live on the home screen and include a “Special Offer for GALAXY” section that will highlight unique, country-based content for users.

The new GALAXY Note 10.1 comes with enhanced privacy and security protection provided by Samsung KNOX. Users can activate Samsung KNOX with ease which allows them to run and store securitysensitive applications and data inside a protected execution environment called “container.” The security inside the container is strengthened by system-level protection of Samsung KNOX against malware and phishing attacks as well as hacking attempts on physical devices when devices are stolen or lost. For instance, important personal pictures or video can be stored in the container with no worries for data leakage due to hacking. In addition, users may choose to store enterprise applications and data such as corporate email, contacts and calendar and allow the IT department to manage the container through EAS (Exchange ActiveSync Server). These features make the GALAXY Note 10.1 (2014 Edition) an ideal device for BYOD (Bring-Your-Own-Device to work)