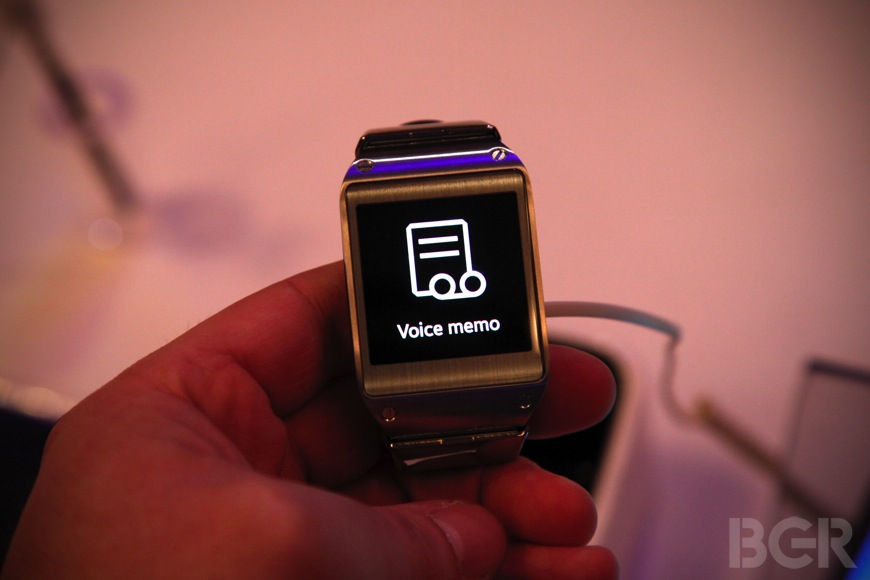 There’s no question that Samsung’s Galaxy Note 3 was highly anticipated leading up to Wednesday’s IFA announcements, but most enthusiasts seemed even more excited for another new Samsung device. Yes, the Galaxy Gear is now official and it marks the start of the wearables war. Smartwatches are nothing new, of course, but offerings from major consumer electronics companies thus far have gone largely unnoticed. In fact, the most talked-about smartwatch on the planet is nothing more than a rumor right now. Regardless of if and when Apple debuts its “iWatch,” Samsung has struck first and it will use its momentum and its massive marketing budget to give smartwatches their best shot yet at becoming a category that actually matters.

Samsung’s Galaxy Gear smartwatch isn’t exactly a masterpiece when it comes to fashion, but at least it’s not as ugly as the prototype we saw leaked photos of a few days ago. The styling might even appeal to some users who aren’t afraid to let their nerd flag fly.

The Gear hardware in general feels much better than your typical Samsung device. The main reason, of course, is that Samsung opted for stainless steel for the Gear’s case rather than its typical plastic. The result has a much more premium feel than we’re used to from Samsung, and that’s a good thing.

In terms of the look of the device, well, it could be worse. The face of the Galaxy Gear is just a display wrapped with a nice brushed steel that is sleek and reasonably good-looking. The four exposed screws are a nice touch as well. There’s a camera integrated into the Gear’s strap as well as a speaker.

For a gadget, the Gear is nice and small. For a watch, it’s tremendously bulky.

Moving on to the software, the Galaxy Gear’s user interface is suited well to a device with such a small display. And “small” is relative, by the way. Compared to a smartphone, the Gear’s screen is minuscule — but it’s pretty huge on the wrist, especially for smaller people with thin arms. For example, the Galaxy Gear looked positively ridiculous on the women from Icona Pop as they performed in Times Square ahead of Samsung’s press conference on Wednesday.

Swipes and pokes control the Galaxy Gear’s interface, which Samsung describes as “tomorrow’s state of the art.” It’s very minimalistic and completely unlike Samsung’s TouchWiz Android UI. It looks great on the Gear though, and the software was very responsive while I tested it.

It’s another device to charge, it means you’ll have to stop wearing your real watch, and it’s probably not a look that will appeal to most people at this point. The Galaxy Gear will also cost $299.99 when it launches on September 25th, so it’s pretty pricey for a device that is anything but a necessity.

We’ll dig deeper in our full Samsung Galaxy Gear review but in the meantime, check out our quick hands-on photo gallery.