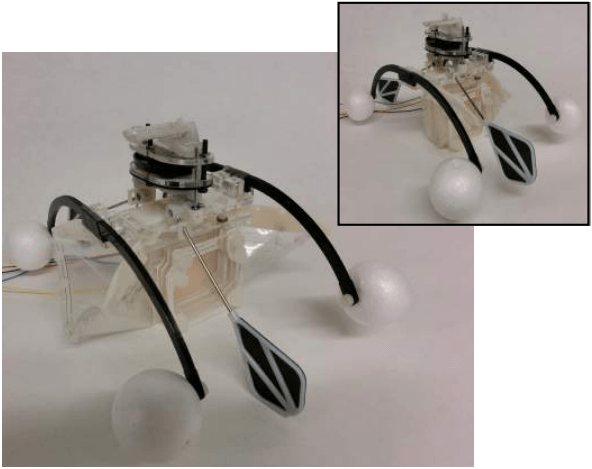 Sometimes you just have to tip your hat to researchers who work tirelessly to further technology not simply for profit or fame, but to better the world around them. This is especially true when their inventions are as impressive as the Row-bot. The tiny robot pictured at the top of this page isn’t some cute little children’s toy parents will need to fight their way through crowds to purchase this coming holiday season. It’s a scientific breakthrough that could have a dramatic impact on the environment.

First presented last month at the IEEE/RSJ International Conference on Intelligent Robots and Systems in Hamburg, Germany, the Row-bot is a essentially a fuel cell powered by electricity that is generated solely by bacteria living inside the device. The beauty of this particular bacteria-powered fuel cell, however, is the means by which the tiny organisms living in its gut generate that electricity.

The Row-bot has four tiny buoyant stabilizers for feet and two paddles that extend from the middle of its body. While the feet keep Row-bot afloat, the paddles send it skimming across the surface of a body of water. The device takes water into a cavity in its housing as it moves, where electrogenic bacteria digest pollutants found within the water. The byproducts of that digestion are carbon dioxide and electricity, which in turn fuels the Row-bot and keeps it moving.

Row-bot is the brainchild of a team of researchers from the University of Bristol, Bristol BioEnergy Centre and Bristol Robotics Laboratory, all located in Bristol, England.

The team continued, “The energy generated exceeds the energy requirement to complete the mechanical actuation needed to refuel. Energy production and actuation are demonstrated separately with the results showing that the combination of these subsystems will produce closed-loop energetic autonomy. The work shows a crucial step in the development of autonomous robots capable of long term self-power.”

Imagine that: A self-driving, self-powered robot fueled by waste that pollutes the Earth.