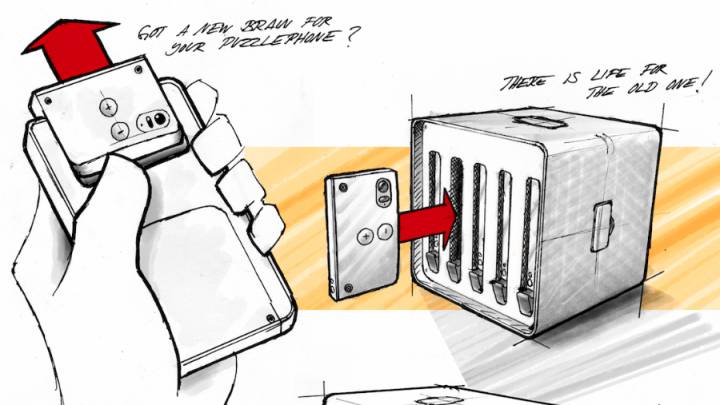 Google’s Project Ara isn’t the only modular smartphone concept out there, though Google is closer than anyone else to actually selling such devices. Puzzlephone is one such other device, though the team behind it has a different approach than Google when it comes to modules.

Instead of letting users swap in and out tiny modules like on the Project Ara phones, Puzzlephones will have three bulkier modules, each containing certain components, which could be swapped in the future to upgrade a device. Interestingly, though, the team has also thought about what happens with discarded modules that aren’t needed any longer.

Instead of users forgetting about old modules, or recycling them, they could simply pile them up in special boxes and build all sorts of computers that could be used for other purposes than mobile communications.

The Circular Devices team announced on its blog the Puzzlecluster, a box-like device that could house a variety or Puzzlephone parts as the user upgrades the handset. Furthermore, users could bundle more than one Puzzlecluster to create even more powerful computers that could be used around the house.

Specifically, the Puzzlecluster will let you reuse the Puzzlephone’s Brain modules (which contain the CPU) and the Battery modules.

A concept image showing what a Puzzlecluster computer would look like follows below.