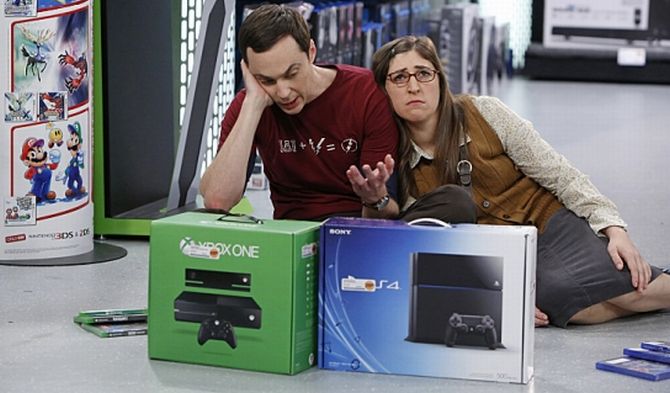 Winning the heart, minds and wallets of gamers around the world is the easy part. Winning over Dr. Sheldon Cooper, on the other hand, is the ultimate challenge for the new console generation. Microsoft and Sony both launched their next-generation video game consoles ahead of the holidays last year, and both boxes have gotten off to a phenomenal start. The PlayStation 4 has clearly pulled ahead in terms of sales, while the Xbox One’s game selection still has an early edge. What will undoubtedly be the toughest task these great consoles have faced to date, however, is making their way into Sheldon and Leonard’s apartment on Thursday night’s episode of The Big Bang Theory.

As noted by PlayStation blog DualShockers, an upcoming new episode of CBS’s hit sitcom will see one of the show’s two protagonists, Sheldon Cooper, try to decide whether he should purchase a PS4 or an Xbox One. Played by Jim Parsons, the quirky Dr. Cooper is joined by his girlfriend Amy at a local electronics store as he overanalyzes his options while agonizing over the decision.

Which way will Sheldon go? Will he end up buying both boxes? Will he give up and take home a Wii U?

Thursday night’s episode of The Big Bang Theory, titled “The Indecision Amalgamation,” airs at 8:00 p.m. EDT. A preview of the episode is embedded below.