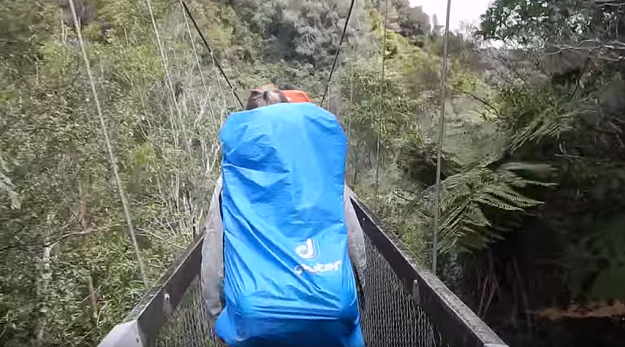 A group of French tourists vacationing in New Zealand got more than they bargained for when a suspension bridge they were walking on unexpectedly broke. The tourists were out on a hike on the Lake Waikaremoana Great Walk when the bridge, hoisted up 25 feet above a river, suddenly sent them spiraling down into the water below.

Thankfully, none of the tourists were seriously injured and there’s even some harrowing video of the entire ordeal which has been circulating around the web. The incident went down on September 3 with video of the fall having been uploaded to YouTube earlier this week.

The bridge is reportedly strong enough to support 10 hikers concurrently but reportedly gave way when a cable supporting the bridge was “released.” The bridge is now closed pending an investigation into how things went awry.

Oddly enough, this isn’t the first bride-related story we’ve seen this week. Just a few days ago we highlighted how China’s new glass suspension bridge, which rests atop a 3,500 deep canyon, began to exhibit cracks. While officials swear that the glass is incredibly safe and sturdy, there’s something about cracked glass that will likely keep many people on the ground.