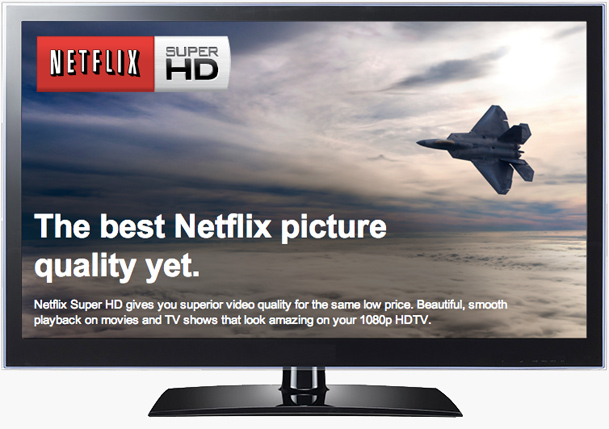 Netflix (NFLX) on Tuesday announced new enhanced streaming options for users on select ISPs. Following a series of rumors that suggested as much, Netflix has confirmed the availability of “Super HD” streaming — which is simply Netflix’s branding for 1080p content — and 3D video streaming. Both services are available immediately with a huge caveat: only Netflix subscribers with Cablevision or Google Fiber Internet service have access to the new content. For those lucky subscribers, Super HD and 3D content is accessible using a number of devices including the Wii U, compatible Roku players, the , Windows 8 PCs and select smart TVs and Blu-ray players. Netflix’s full press release follows below.

In early 2012 Netflix began enabling Internet service providers (ISPs) to receive, at no cost to them, Netflix video directly at the interconnection point of the ISP’s choice. By connecting directly through Open Connect, ISPs can more effectively manage their networks and more efficiently deliver Internet services to consumers, including the more than 1 billion hours of Netflix TV shows and movies consumers watch every month.

Netflix Open Connect is now widely deployed around the world, serving the vast majority of Netflix video in Europe, Canada and Latin America, and a growing proportion in the U.S., where Netflix has over 25 million streaming members.

“Leading-edge ISPs around the world such as Cablevision, Virgin Media, British Telecom, Telmex, Telus, TDC, GVT, among many others, are already participating in Open Connect to provide the highest-possible quality Netflix service to consumers,” said Netflix Chief Executive Officer Reed Hastings. “Our goal is to have all of our members served by Open Connect as soon as possible.”

“Optimum is committed to providing the highest-quality TV, phone and Internet to our customers, and our new partnership with Netflix supports this critical objective,” said James L. Dolan, president and CEO of Cablevision, the most recent major provider to join Open Connect. “With Open Connect, we are establishing a direct local connection with Netflix that delivers a higher-quality Netflix viewing experience for Optimum customers than Verizon or AT&T can provide, including access to new Netflix Super HD and 3D TV shows and movies.”

In the U.S., Netflix is also for the first time offering a small number of titles streaming in 3D through Open Connect partners. Available for 3D viewing are, among other titles, the action fantasy drama “Immortals,” Red Bull Media House’s snowboarding documentary “The Art of Flight,” and a number of titles from the Discovery/Sony/Imax joint venture 3net Studios – including the native, original 3D series “African Wild,” “Scary Tales,” and “Live Fire.” Depending on member demand, Netflix will consider adding 3D titles and expanding availability to international markets.

“These new Super HD and 3D formats are more challenging to deliver than our other video streams, which is why we will deliver them through Open Connect,” said Ken Florance, vice president of content delivery at Netflix. “Any ISP that wants to be able to deliver our new formats can do so easily and for free.”

Netflix members can verify if their ISP is part of Open Connect and provides access to Netflix Super HD and, in the U.S. only, 3D on this Web site: http://www.netflix.com/superhd

ISPs that are not yet on Open Connect can contact Netflix at openconnect.netflix.com to start their Open Connect relationship. As part of Open Connect, Netflix is also sharing its hardware design and the open source software components. These designs are suitable for any other provider of large media files and are very cost efficient.