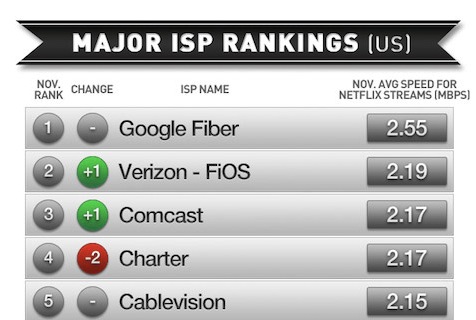 No, it’s not particularly surprising the Google (GOOG) Fiber now delivers the fastest Internet service in the United States. But as Engadget reports, new Internet service provider rankings from Netflix (NFLX) show that Google’s high-speed fiber network is in a class all its own. Overall Netflix found that Google Fiber delivered an average of 2.55Mbps for Netflix streams, while no other service provider provided average stream speeds of 2.2Mbps. Verizon’s (VZ) FiOS came in second place with 2.19Mbps for Netflix streams, followed by Comcast (CMCSA) and Charter at 2.17Mbps. Numbers like this make it all the more tragic that Google would likely need to raise a budget-busting $140 billion to spread Google Fiber all across the United States.