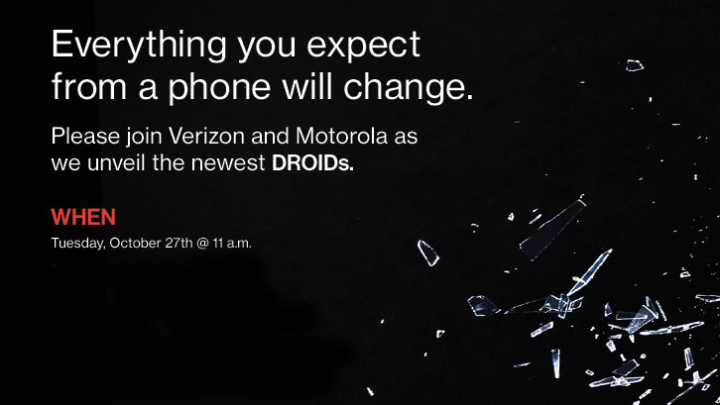 We’re might just drown in Android devices before the year’s over. On Wednesday, Motorola and Verizon sent out press invites to an event in which the two will unveil the latest line of Droid smartphones. According to the invite: “Everything you expect from a phone will change.”

How exactly our expectations will change remains to be seen, but with all of the well-received Android phones that have made their way to market already this year, Motorola had best bring something impressive to the stage.

Rumors suggest that we’ll see both the Droid Turbo 2 and the Droid Maxx 2 at the event. A rather extensive list of specifications for a device with the codename “Kinzie” appeared several months ago, and recent evidence points to this being the Turbo 2. If so, the new flagship will likely feature a 5.5-inch QHD display, Snapdragon 810, 3GB of RAM, 20-megapixel rear camera, 5-megapixel front camera, Turbo Charging, and Android 5.1.1.

The event begins on October 27th at 11 a.m. ET in New York City. We’ll be sure to bring you all the up-to-date news as it hits on the day of the event.