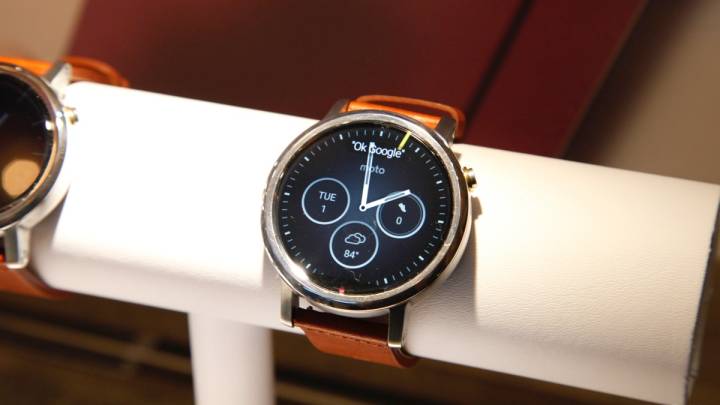 Motorola’s Moto 360 smartwatch was arguably the first such device worthy of our attention when it debuted in 2014. The Android-powered watch was sleek and stylish in a world full of clunky, unattractive designs, adding some much-needed style to the Android smartwatch landscape. But the very fact that it was an Android smartwatch was one of its biggest problems; Android Wear was great in concept, however in reality it was practically unusable for the average consumer.

On Wednesday, Motorola unveiled the second-generation versions of its Moto 360 smartwatch, looking to improve on the first-generation version in every way possible. While it did accomplish that goal to an extent, the original model’s biggest problems may still be barriers for many users.

With the new Moto 360, Motorola chose to focus on a few different key areas, with the first and most obvious being personalization. The first-gen model offered buyers a few different choices when it came to case color and band type, but the new version takes things to an entirely new level.

According to Motorola, the new Moto 360 is available in about 300 different case and band configurations. The company’s trademark Moto Maker website can be used to access all of the different options, while some preconfigured builds will be available in partner retails stores and partner websites.

The second-generation Moto 360 comes in four different versions. The main model is available in 42mm and 46mm sizes, and then a third “women’s edition” version is available with smaller bands. Then, a 42mm Moto 360 Sport model adds built-in GPS, local music storage and a different screen that uses a combination of transmissive and reflective display technologies to make it more visible in direct sunlight.

They all feature similar looks that are absolutely a cut above any other Android smartwatches… until you turn them on.

Motorola’s “display shelf” on the original Moto 360 was a big point of contention. Despite the device’s name, it didn’t feature a true 360-degree display because the bottom was cut off and folded under to make room for sensors and other key components. According to Motorola, this allowed the company to keep the bezel around the watch as thin as possible.

That same “display shelf” is also present on the new Moto 360.

If you’re on board with Motorola’s mission, to keep the bezel around the screen as thin as possible and enhance the overall look of the device, then this clearly won’t be an issue. Motorola notes that its display takes up 71.7% of the watch’s face, while the display on the Apple Watch only takes up 49.1% of the face.

And make no mistake, when the watch is off it is absolutely the best-looking Android smartwatch the world has ever seen. If the display shelf spoiled the original Moto 360 for you though, you won’t be interested in the second-generation model either.

Compared to rival products, the Moto 360 is absolutely the most customizable and fashionable Android watch on the market. Using the Moto Maker, it’s shockingly easy to design a watch that is perfect for your style. It also features Wi-Fi support and a faster processor than the one that powers its predecessor, though I did still have issues with tap recognition and general lag on the pre-release units I tested earlier this week.

The performance issues seem to be universal across all Android Wear devices, however — and across the Apple Watch as well, for that matter — so software updates may be key to improving the device’s performance. Motorola does add some nifty features on top of Android Wear as well, such as the “live dials” on its watch faces, which are similar to complications on the Apple Watch.

Motorola’s second-generation Moto 360 launches in mid-September with prices that range from $299.99 to $429.99. It will be available in four colors: Silver, gold, rose gold and black.