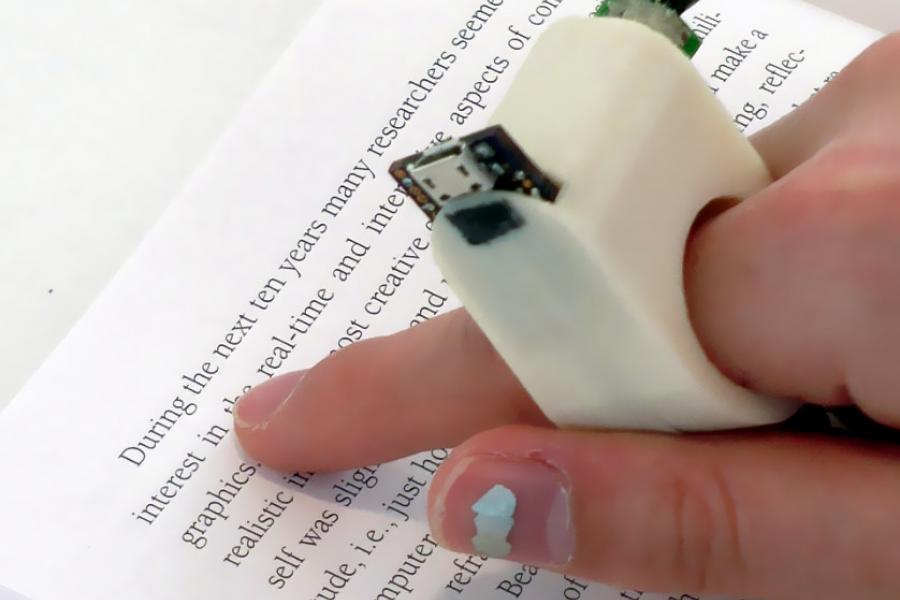 FingerReader is the name of a wearable gadget that could help visually impaired people read printed text in books and even on electronic devices, thus opening up additional possibilities to them. Developed by MIT researchers, FingerReader wants to help the blind access more resources than what’s already available in braille format. TechCrunch reports that, according to a recent study from the Royal National Institute of the Blind in Britain cited by one of the researchers, in 2011 only 7% of books are available in large print, unabridged audio and braille.

Currently in prototype phase, the FingerReader is essentially a ring that you can use to follow a line of text in a book or on a screen. Thanks to the built-in camera, the gadget can detect 12-point text, which can then be read aloud by the device. The gadget is smart enough to recognize when the user deviates from the line of text and offer feedback to adjust hand movement, and knows when the end of the line is reached. One feature the MIT researchers do not explain is how users will move seamlessly from one line of text in a book to the next, given that their visual impairment may prevent them from actually seeing the text.

While the main use FingerReader may be to help people with visual problems read books, magazines and text on a digital device, it could evolve into a gadget that can be used by people who don’t have any visual impairments for other purposes, such as translating text from other languages, or simply reading text aloud. However, it’s not clear when the FingerReader, if ever, will be available commercially.

The video below further explains how the technology works in its current form.