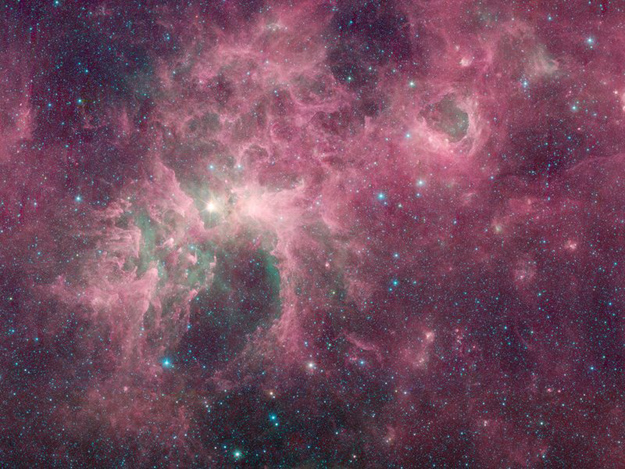 The photo you see above is one minuscule portion of a staggeringly massive infrared panoramic photo captured by NASA’s Spitzer Space Telescope that manages to squeeze the entire Milky Way galaxy into a single photograph. That single photograph, mind you, is a 6GB file.

The Spitzer Space Telescope took 10 years to capture all of the imagery that went into building the incredible image. And the best part about this massive panorama is that NASA broke it into pieces that can be seen in a series of interactive viewers on the Spitzer website.

If you really want to get crazy, you can also download the RAW files that can be combined to make up the entire Milky Way galaxy.

The main photograph is broken up into eight sections on NASA’s Spitzer website, and each section is 67,500 pixels across. As Smithsonian.com noted, a print of the full image would be about 150 feet wide.

So what, exactly, is included in this massive 6-gigabyte photograph? Only about 300 billion stars — many of which are 13.2 billion years old — that occupy a galaxy roughly 100,000 light-years in diameter.

A video that pans through some sections of the Milky Way photo is embedded below. All of the interactive viewers can be seen on NASA’s site, which is linked down in our source section.