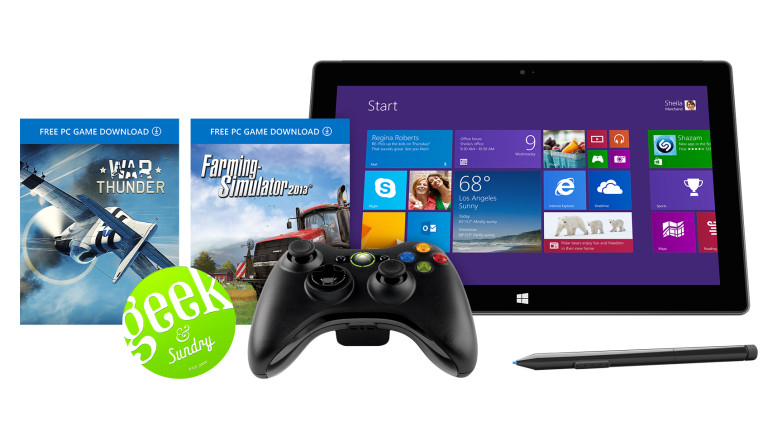 Microsoft has devised a new clever way to convince customers to purchase a Surface tablet: the new Surface Pro 2 “Geek” bundle that packs some interesting additional extras including an Xbox controller and two downloadable game. The bundle’s pricing starts at $899 and it’s available exclusively at Microsoft’s online store, with users saving $104 on the free PC games part of the offer including War Thunder Mustang Advanced Pack and Farming Simulator 2013 – users won’t be able to choose any other titles though.

As for the Xbox Wireless Controller for Windows that’s part of the bundle, we’re looking at the Xbox 360 controller for Windows, which comes with an included USB receiver that will support up to four wireless controllers and headsets simultaneously. Sadly, the bundle does not come in a version that includes a free Xbox One controller, which may have certainly appealed more to Xbox One console owners. For what it’s worth, Windows is yet to make the new controller compatible with Windows PCs, although the company has confirmed that users will able to play PC games with the Xbox One controller in the future.

The bundle is valid from April 3 to May 1, or while supplies last, Microsoft revealed, but it’s only limited to Microsoft’s U.S. and Canada online stores.