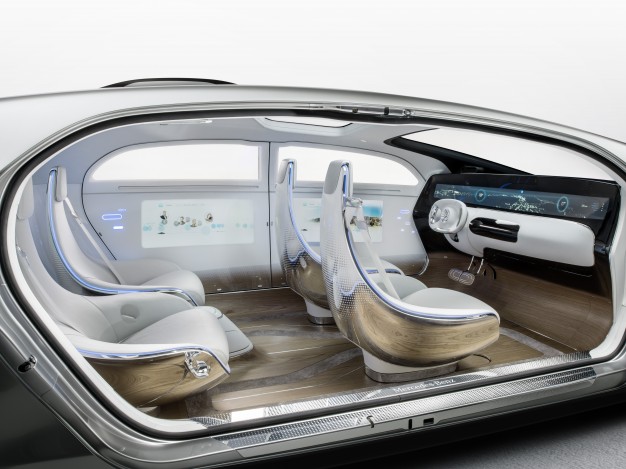 Google isn’t the only company out there interested in putting self-driving cars on the road, and the search giant may have some serious competition in the future, with companies such as Mercedes-Benz also looking to offer passengers smart cars that drive themselves around. Unlike Google’s cutesy self-driving car concept, the new autonomous car unveiled on Monday by Mercedes-Benz looks more like the luxurious smart car you’d want to own in the future.

FROM EARLIER: This is what it’s like driving one of Google’s ‘freaky’ self-driving cars

Announced at CES 2015, the F 015 Luxury in Motion is a huge electric car that drives itself around, with passengers being connected at all times to the outside of the car with help of six high-resolution touchscreen display panels placed on the doors. Passengers can use touch, gestures and eye movements to see outside the car.

Powering the car are an electric motor and hydrogen fuel cell, Reuters reports. The F 015 has a lightweight impact-resistant structure of carbon-fiber, aluminum and steel.

The F 015 measures 17 feet in length and 5 feet in height, and has large 26-inch wheels pushed to the far corners in order to maximize space inside. Passengers sit in pedestal seats that rotate 30 degrees when the doors are opened. The seats can also be rotated to allow face to face conversation while the car is driving itself.

“Anyone who focuses solely on the technology has not yet grasped how autonomous driving will change our society,” Daimler AG chairman and head of Mercedes-Benz Cars Dieter Zetsche said. “The car is growing beyond its role as a mere means of transport and will ultimately become a mobile living space.”

The F 015 can be manually driven, if passengers so desire, and while on auto-pilot mode it has an interesting feature that lets pedestrians know it’s safe to cross — LED lights placed in the car’s grill light up, projecting a crosswalk on the street.

A video showing the F 015 in action follows below.