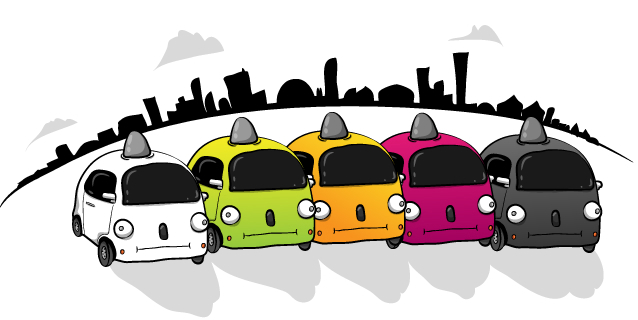 Google is still a ways away from selling its self-driving cars to actual people, but working prototypes of Google’s self-driving cars are already being tested. And famed cartoonist The Oatmeal, whom you might also know for the Tesla Museum campaign he successfully funded not so long ago, managed to review these interesting machines at work while humorously sharing his findings about the experience.

FROM EARLIER: Tesla reveals the next step in its plan to kill gas-guzzling cars for good

In a lengthy blog post titled “6 things I learned from riding in a Google Self-driving Car,” The Oatmeal detailed his experience inside the “timid” and “cute” Google moonshots that can currently drive you around at safe cruising speeds of up to 25mph, looking like Skynet Marshmallow Bumper Bots in the process.

The Oatmeal acknowledged that the technology is still in its infancy, and Google has a long way to go, but that ultimately this particular gadget will be highly appreciated by certain car users.

“At one point during the trip, we were attempting to make a right turn onto a busy road. Everyone’s attention was directed to the left, waiting for an opening. When the road cleared and it was safe to turn right, the car didn’t budge. I thought this was a bug at first, but when I looked to my right there was a pedestrian standing very close to the curb, giving the awkward body language that he was planning on jaywalking. This was a very human interaction: the car was waiting for a further visual cue from the pedestrian to either stop or go, and the pedestrian waiting for a cue from the car. When the pedestrian didn’t move, the self-driving car gracefully took the lead, merged, and entered the roadway.”

“Freaky,” he added, but later said he wants the technology “to succeed, like… yesterday.”

“[The people who question self-driving cars] ignore the great, big, beautiful picture staring them right in the face: that this technology could make our lives so much better,” he explained.

The entire piece is definitely worth reading — check out the link in the source section below.