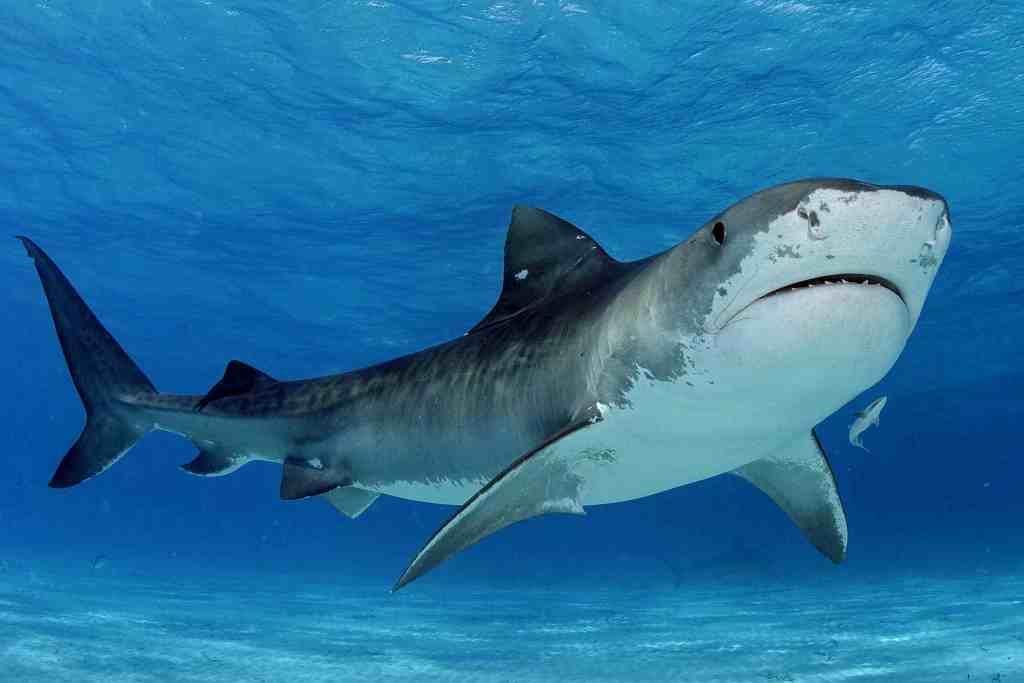 The fearsome tiger shark is not the shore-hugging beast scientists long believed, according to a new study by Nova Southeastern University’s Guy Harvey Research Institute in Florida. The study tracked several of the fish over a two-year period and recorded them crisscrossing oceans and, in one case, logging more than 27,000 miles – this might be the longest track ever recorded for any shark – in both coastal and open waters.

Tiger sharks were thought to be a species that preferred the coast as opposed to the open sea, but these new trackings, which were observed by way of satellite–read tags, revealed that the sharks travel over 4,660 miles, round–trip, each year between the coral reefs of the Caribbean and the open waters of the mid–North Atlantic.

“Like most other migratory marine animals (e.g., birds, whales, turtles) it’s likely to get to places that have a rich source of food, or are a good place to reproduce or (for females) to give birth,” Mahmood Shivji, senior study author told FoxNews.com. “In the case of our tiger sharks, they were mostly male and we have a hunch that they go so far north and out into nearly the middle of the Atlantic to forage.”

While the sharks liked to spend their winters hanging out in such Caribbean hot spots as the Bahamas, Turks and Caicos Islands, and Anguilla, as soon as summer rolled around it was revealed they ventured far into the North Atlantic. They would go as far north as Connecticut, though off-shore and closer to mid-ocean waters.

Why the sharks would prefer the Caribbean was fairly obvious — there’s plenty of available food down there, not to mention female tiger sharks.

One theory has them foraging for one specific delicacy — young loggerhead turtles, which also happen to migrate north. Stomachs of tiger sharks killed in the region by long liners have yielded turtle remains, which would seem to back this. However, there are also turtles further down south.

Tracking a tiger shark for over two years is no easy task in that the logistics of working with a large animal in a harsh sea environment is costly and time consuming. This is what makes this kind of long-term tracking so remarkable.

Shivji, who is also the director of the Save Our Seas Shark Center, said that he believes it’s a combination of the way their tags were attached and also the migratory patterns of the sharks themselves that allowed them to avoid such common problems as tag malfunctions due to algae.

“I think that we were able to get two and three-year plus tracks because this group of sharks was highly migratory, moving long-distances between very different ecosystems and temperatures,” he added. “[Algae] picked up in one environment (e.g., the warm Caribbean) did not survive and fell off the tag when the shark migrated to colder waters north.”

The sharks were tagged near Bermuda, which is a popular pit stop for the apex predators when travelling north and south — plenty of other animals stop there during migrations, making it an all–you–can–eat buffet for tiger sharks.

These trackings are necessary, not only to understand the way sharks migrate but to help protect the endangered creatures as well.

Knowing where tiger sharks dwell may help keep them out of harm’s way from the fishing industry, Shivji said.

“Managing fisheries for highly migratory shark species is a huge challenge since they cover so much area, not staying in the territorial waters of any one country,” he explained. “The long-term tracking will show where and when the sharks spend most of their time during their travels on a predictable–this is key– basis. Once we have this information, implementing protection measures becomes more tractable since it provides geographic areas to focus management and conservation efforts on.”

Some of the tracks are still active, and can be viewed at www.ghritracking.org.