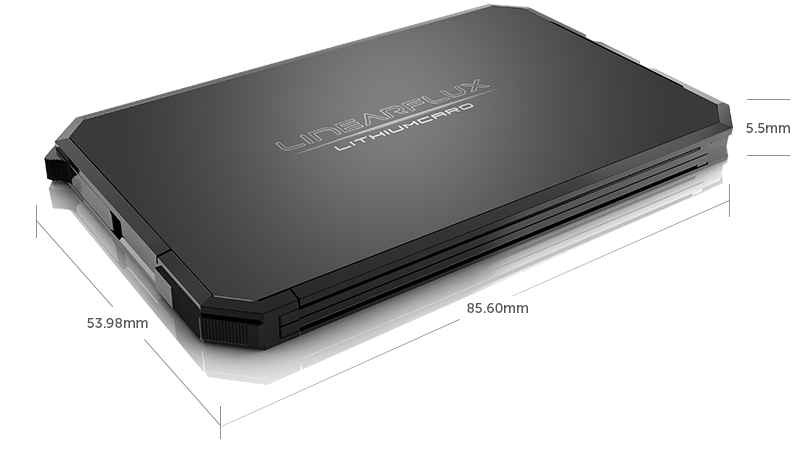 LinearFlux on Thursday launched its Indiegogo funding campaign for a very interesting external battery charger project for mobile devices – the LithiumCard, “the world’s only ‘Rechargeable HyperCharger.’” The LithiumCard has about the same size of a credit card, while being slightly thicker, and thus it can be carried around in a regular wallet. The battery can hold a charge of 1200mAh, and, most interestingly, sports a fast charging technology that the company claims can charge devices faster than similar products from competitors.

“HyperFET charging technology calculates a device’s most optimal charging profile and is capable of delivering up to 1% increase in battery life per minute,” the company writes. “Offers up to 2 amps, or up to 10 Watts of on-demand power! If there is only 15 minutes to charge, expect up to a 15% increase in a typical smartphone’s battery life. That’s HyperCharging!”

Furthermore, the LithiumCard comes with support for iOS and Android devices, and comes with a built-in charging cord that can be neatly tucked away when not in use. Also, interesting is the fact that it can simultaneously charge a smartphone, tablet or an other device that supports Lightning or microUSB charging and charge itself, as long as the LithiumCard is connected via USB to an external power source.

The company has already raised over half of its $30,000 goal in less than a day, and since the campaign has flexible funding, it will receive funds raised even if it doesn’t reach the target. With 38 days to go, users that want to submit pledges have the option of paying anywhere from $1 to $10,000 – $35 is the cheapest price for the LithiumCard, a $15 off discount from the projected retail price. The Lithium Card should ship at some point in May.

In case additional stretch goals will be reached, the LithiumCard may include other features including a NanoStick technology that keeps the card virtually stuck to a device that’s charging.

Videos revealing more details about the LithiumCard and the full press release follow below.

“We didn’t want to do the same thing over and over again like everyone else and expect different results. We looked at what’s available today and there weren’t any ideal solutions, so we set out to make the thinnest all-inclusive HyperCharger,” said Kayson, Managing Director of LinearFlux. “We needed it to charge faster than anything that is available in the market. Because let’s face it, we all hate waiting. Charging the most power hungry devices while still blending with everyone’s lifestyle. Most of all, the solution really needed to fit in a wallet; since that’s what I carry around everyday; my wallet, keys and smartphone”.

Maximized Design Efficiency: The Swiss army knife is synonymous with the jack of all trades when it comes to utility. Lithiumcard takes that philosophy a step further with a twist of style in the execution. Karl Lagerfeld once stated “fashion is about two things: the evolution and the opposite”. So while everyone else is making the mundane, large capacity, plastic battery packs; LinearFlux went the opposite direction. A business card sized, an all-inclusive design that incorporates advanced features packaged neatly in a luxurious billet aluminum housing.

HyperSpeed Charging: HyperFETTM charging technology calculates a device’s most optimal charging profile and is capable of delivering up to 1% increase in battery life per minute. Offers up to 2 amps, or up to 10 Watts of on-demand power! If there is only 15 minutes to charge, expect up to a 15% increase in a typical smartphone’s battery life. That’s HyperCharging!

No Spider Webs: What’s worse than untangling a spaghetti mess of cables or having a battery pack hanging from a device while in use? LithiumCard has a flip-out USB for recharging and either a micro-USB, or Apple Lightning connector, for charging most popular mobile electronic devices sold today. Utilizing advancements in nanosuction technology, each LithiumCard includes a rinse-able, NanoStik pad, so it sticks to virtually any surface.

LinearFlux’s goal is to raise $30,000 by April 6, 2014 to finalize development. The Lithiumcard is initially available for Indiegogo contributors to preorder in the following brushed finishes: silver, titanium, and gold colors. Exclusively to Indiegogo are, limited edition Lithiumcards in 18K Gold and Black-Chrome finishes enclosed in a stainless-steel billet housing. Early contributors can expect to receive their Lithiumcard in May 2014. Once available, retail pricing is expected to range from $39.99-$49.99.

Lithium card images, videos, and logo are available at http://www.linearflux.com/lithiumcard/press

About LinearFlux
A team that consists of over 30 years’ experience in the Consumer Electronics industry, LinearFlux is focused in pioneering products that incorporate the needs of today’s lifestyle. Employs the philosophy of “Connecting Simplified” for how it approaches the development of all its products. Visit http://www.linearflux.com/lithiumcard for more information. Connect with us on Facebook, Twitter and Instagram @LinearFlux.