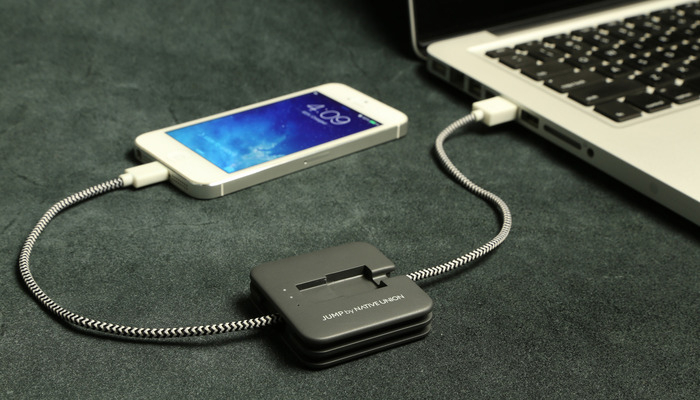 With less than tree days to go, Native Union’s Jump Kickstarter project is approaching $300,000 in pledges, well over its initial $40,000 funding goal. “The Jump” is a smartphone charger that works with the iPhone as well as Android and BlackBerry devices, and which has a hidden feature: A battery of its own that can provide additional power on-the-go.

The Jump is a tiny, ultra-portable device that weighs 40g and measures 50 x 50 x 13.6mm and comes either in an iPhone version equipped with a Lightning port, or a microUSB version that’s good for other smartphones. Inside the charger, there’s an 800mAh battery that can deliver almost four hours of extra talk time on the phone, or up to 87 hours of standby time.

The device comes with a smart AutoCharge technology that knows when the smartphone is fully charged in order to divert energy from the source to replenish its own batteries.

The Jump is expected to be delivered in May, and interested backers that have not submitted a pledge yet can purchase one for $40 (the only tier currently available on Kickstarter), which is 20% less than what the device cost when it will become commercially available. In case the device will top $400,000 in pledges, backers will also receive a handcrafted genuine leather case that would otherwise retail for $19.99.

A video showing Jump in action follows below.