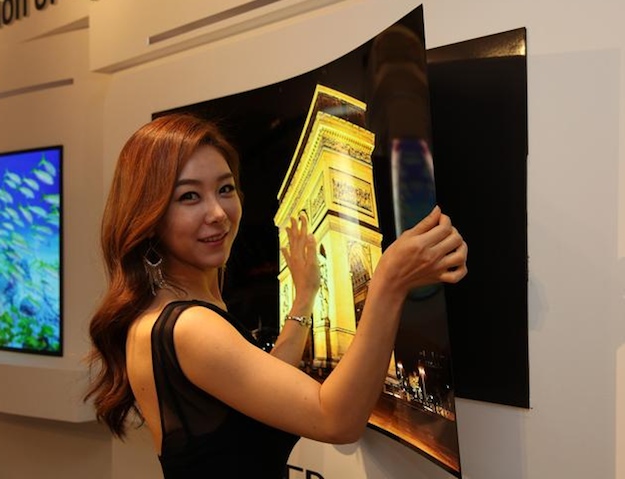 Just when you thought that TVs couldn’t possibly get any thinner, LG has gone and upped the ante with an incredible 55-inch OLED wallpaper display that measures in at less than a millimeter and weighs just barely over four pounds.

While the display itself is more of a proof of concept device than something you can pick up at your local Best Buy today, the display may very well be a glimpse into how many of us will watch TV in the (distant) future.

DON’T MISS: These are some of the most hilariously awkward wrong number texts you’ll ever see

As for how it all works, the wallpaper display attaches to a magnetic mat that can be placed on any flat surface. From there, the TV display can be attached and removed with ease. It sounds crazy, but imagine a future where your HDTV is about as mobile as a laptop.

CNET reports that LG’s futuristic display isn’t that outlandish given recent strides the company has made in getting production costs down and improving overall manufacturing methods:

While some OLED screens have been used by companies like Samsung, LG and Sony, the costs are still quite high to produce the displays. Part of that cost is due to a historically low yield, or production of displays that are actually functional. More waste means higher costs on the screens that do make it through production. Those costs are then passed on to consumers. LG’s 65-inch, 4K OLED TV, for instance, costs $9,000.

On Tuesday, however, LG said that it has made significant headway in developing OLEDs. The company touted its position as the first to mass-produce large-screen OLEDs for televisions and said that its yield has hit 80 percent — a strong showing, but still lower than LCDs.

As for displays that aren’t the stuff of science fiction, LG will begin shipping 4K OLED HDTVs in a variety of sizes later this year, including a gargantuan 99-inch display.