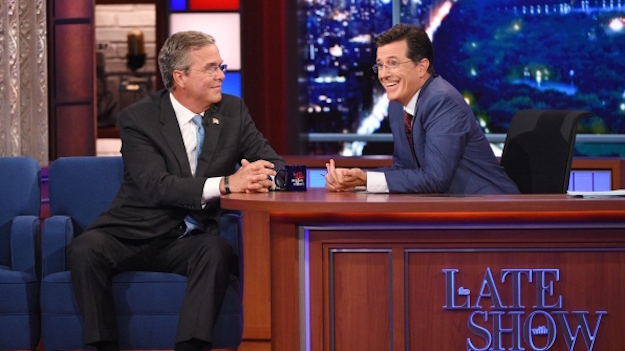 After weeks of amusing YouTube videos and months of anticipation, the new Late Show has finally arrived. On Tuesday night, Stephen Colbert made his long-awaited return to television, taking the place of the irreplaceable David Letterman with a show as entertaining and original as we’d all hoped it would be.

SEE ALSO: An idea that would make Apple’s iCloud a huge value for iPhone users

Admittedly, there were a surprising amount of cursed relics for the first episode of a light-hearted late night talk show, but with cameos from Jon Stewart, Jimmy Fallon and the CEO of CBS Les Moonves, Colbert certainly made an impression on night one. Guests George Clooney and Jeb Bush weren’t bad either.

Unfortunately, the full episode isn’t available for streaming on any service that I checked (at least at the moment), but you can watch the entire first episode on the CBS website for free. The Late Show will also be streaming on CBS All Access every night that it air, so if you’re already signed up for the service, you can start watching live as soon as tonight.

Click here to watch the first episode of The Late Show with Stephen Colbert.