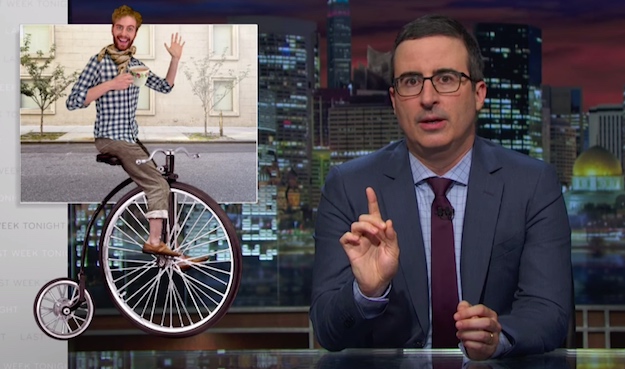 With most popular TV shows currently on summer hiatus, HBO’s Last Week Tonight with John Oliver continues to roll out incredibly funny and thought-provoking episodes week after week. Last night, John Oliver was back in action and focused his attention and unique brand of wit and sarcasm squarely on the shady auto lending industry.

In a nutshell, auto lenders have perfected the tasteless art of advertising to and effectively swindling individuals in desperate need of a car into contracts that ultimately leave them with huge piles of debt, often leaving them in a gravely worse financial position than when they first signed on the dotted line.

“Theoretically, it is a good thing that car dealers lend money to people who can’t get financing elsewhere,” Oliver explains, “but in practice, these dealerships contract people with few options into paying vastly more than the car is worth. It’s just one of the many ways in which when you are poor, everything can be more expensive. The average interest rate on a ‘buy here pay here” lot is 19% with some paying up to 29%. And that interest is on top of lock-ups and add-ons that can inflate of the car.”

What’s more, Oliver details how many car dealerships that tend to prey on users with little money will be quick to repossess cars after the first missed payment. “The problem is,” Oliver elaborated, is that “even if you’re just a few days late on a payment, the dealership can repossess your car. And sometimes, it’s with little regard for what’s inside.” The show then cut to a 2015 news story involving a Florida woman whose car was repossessed while her 9 month old baby was still inside.

Full video of the episode can be viewed below. Per usual, it’s well worth checking out in its entirety.