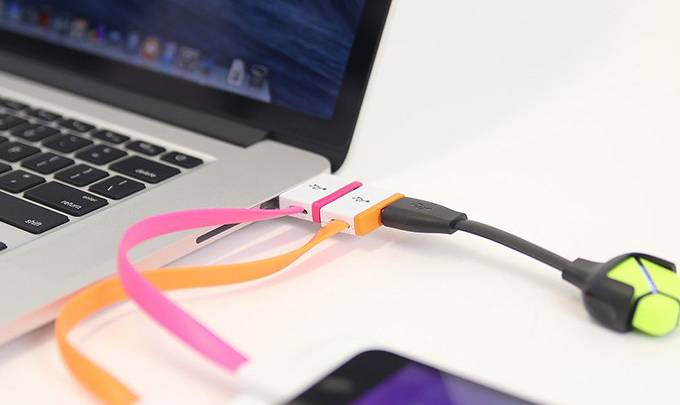 The Retina MacBook is a remarkable piece of engineering, but the 12-inch ultra-slim computer does have one feature that’ll annoy many computer users: The single USB-C port that’s supposed to be used for both charging the battery and connecting peripherals. However, you won’t be able to do all these things at once without purchasing additional accessories. Apple already stocks a few models, but you might be better off looking at Kickstarter for a better solution, as there already are some products looking to fix the USB-C problem.

The InfiniteUSB project is already a very popular option on Kickstarter and a very clever one too. It’s not a dock, but an open chain of USB ports that basically offers you an unlimited number of open slots. With InfiniteUSB, you’ll be able to connect as many USB devices you want, whether it’s for charging batteries or transferring files.

InfiniteUSBs come in various versions, including Lightning, microUSB, female USB and USB-C, with prices starting at $12. The project has raised almost $170,000, almost 17 times its original goal, and the company will start shipping InfiniteUSBs at some point in June – you still have five days to buy a bundle of cables.

If that’s not nearly enough for your connectivity needs, especially if you plan to use the Retina MacBook primarily for work, then you need a proper dock that can offer more than just USB connectivity. Such is the case with the HydraDock, also a Kickstarter project.

The $99 dock, which is supposed to ship to backers in June assuming the $35,000 goal is reached by then, comes with no less than 11 ports, including four USB 3.0 ports, two USB-C ports, one HDMI port, one Mini Display Port, one Gigabit Ethernet port, one SDXC card slot and one 3.5mm headphone jack.

Additionally, the company is also making Lightning-to-USB-C and USB-C car charger cables for the Retina MacBook. The HydraDock has just started is funding campaign and there are 29 days left to back it.