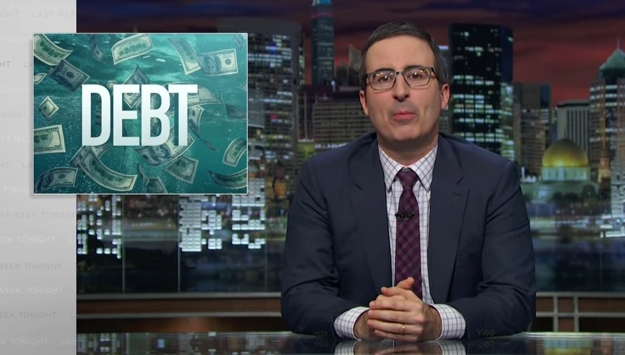 Since leaving the The Daily Show for HBO, John Oliver has been killing it on Last Week Tonight where each and every week he sheds new light on a topic that most people don’t know too much about. Whether it’s eviscerating Donald Trump’s string of failed business ventures or tearing apart the ridiculous US presidential primary system, Oliver has the rare ability to skillfully present information about a murky topic in an easy to follow and hilarious way.

During the most recent episode of Last Week Tonight, Oliver set his sights on a topic that was even obscure by his standards – the murky world of debt collection. As Oliver explains, debt buyers will routinely purchase debt from creditors and the like whereupon they then go after specific individuals with a vengeance. The problem, as Oliver explains, is that sometimes the underlying debt isn’t even owed and that this tends to be a problem that “disproportionately impacts minorities.”

Also problematic, Oliver explains, is that there are barely any rules and regulations as to who can buy debt in the first place. In most states, it’s possible to buy debt with no license. Further, debt holders in some states don’t even need a license to start demanding collecting money from individuals.

“There are places in this country where you need to fill out less paperwork to start collecting money from peoples’ pockets than you do to collect fish from a f**king lake,” Oliver said.

And putting his money where his mouth is, Oliver created a debt acquisition company called Central Asset Recovery Professionals (aka CARP, a hilarious reference to the bottom feeding fish) whereupon he bought nearly $15 million worth of medical debt (for about $60,000) and then swiftly forgave said debt, thus freeing approximately 9,000 people in Texas of onerous debt payments. In doing so, Oliver was responsible for the “largest one-time giveaway in television history.”

“It’s pretty clear by now that debt buying is a grimy business and badly needs more oversight,” Oliver said. “As it stands now, any idiot can get into it, and I can prove that to you because I’m an idiot and we started a debt-buying company.”

Per usual, Oliver’s video drops a whole lot of knowledge about a convoluted topic in an informative and hilarious manner. You can check out the full clip below.