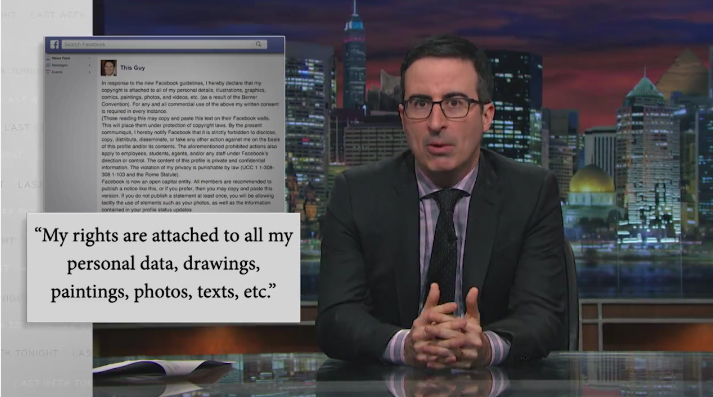 Privacy-related hoaxes and scams are a recurring theme on Facebook, and many users probably don’t know what to look for in order to avoid them. One of the most recent privacy hoaxes even asked users to pay a small sum of money so that they could make sure their profile stays private on Facebook.

None of that is true. Paying someone to keep your data private won’t work. What will work is configuring your privacy settings properly. Oh, and yes, John Oliver has figured out the best way to protect your Facebook privacy.

Let’s get started with the brand new type of Facebook privacy message that’s flooding the news feed these days.

“Now it’s official! It has been published in the media. Facebook has just released the entry price: $5.99 to keep the subscription of your status to be set to ‘private,’” says a new Facebook scam, according to CNN. “If you paste this message on your page, it will be offered free (paste not share) if not tomorrow, all your posts can become public. Even the messages that have been deleted or the photos not allowed. After all, it does not cost anything for a simple copy and paste.”

Declaring your copyright claims for your data posted on Facebook, even if free, is also a hoax – one such claim was published in The New York Times.

A reminder that anything that looks/sounds like this is nothing but fake so please stop posting it on Facebook: #PSA pic.twitter.com/c6LS94sByg

The host of HBO’s Last Week Tonight addressed these Facebook privacy scams in a short video aptly posted on Facebook, explaining that no matter what kind of legal language you might see or use in the news feed, they don’t work because they don’t force Facebook to actually do anything that’s written in the message. Quoting a bunch of legal jargon isn’t going to make your Facebook data any safer.