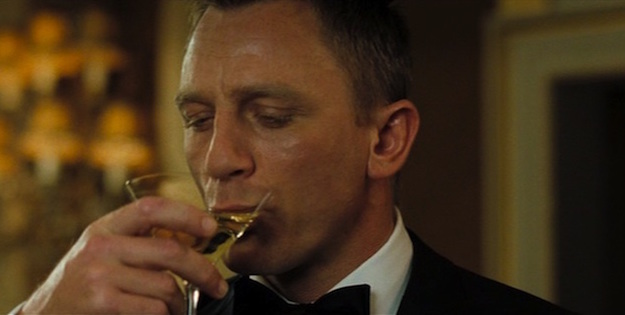 As far as movie characters go, James Bond is the epitome of elegance and deadly ingenuity. And even though I personally think every incarnation of Bond is no match for Jason Bourne, there’s one aspect to Bond’s personality that even Bourne, or any other action hero for that matter, simply can’t match: Bond’s insatiable appetite for booze.

Throughout the 23 Bond films that have been released thus far, James Bond, in each one, is a man who knows how to enjoy the finer things in life, including a drink or three when the situation calls for it.

But just how much alcohol does Bond consume in each of his films? Have his alcoholic tendencies waned in more recent years? Clearly, this is an important issue that has rattled philosophers and movie buffs alike for decades on end.

Well, as it turns out, there’s thankfully no need to slog through endless hours of movie footage because the following infographic compiles all of Bond’s drinking exploits into one handy chart.

As a point of interest, it appears that Bond’s alcoholism was at its height was during Casino Royale when Agent 007 consumed a whopping 26 units of alcohol. Those cocktails sure do add up quickly.

Make sure to hit the source link below to view the chart in its glorious entirety.