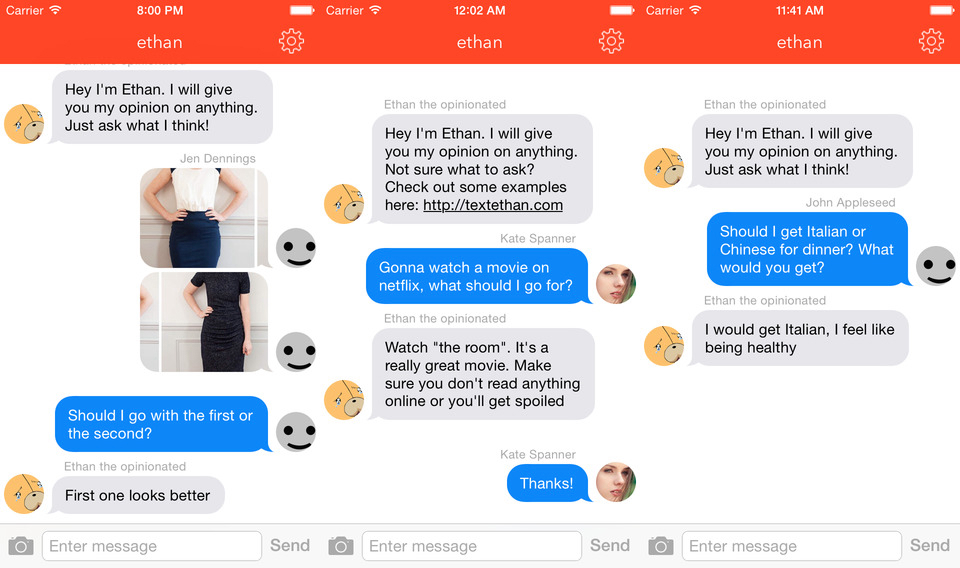 If you think Yo is one of the silliest apps ever created — although some people might find certain special uses for it — you’d be wrong, because at least with Yo, you can sort-of communicate with your friends. The silliest messaging app ever created might be Ethan, available as a free download from the App Store, that only serves one strange purpose, and that’s to communicate with Ethan… and Ethan alone.

“Hi I am Ethan, who made Ethan, a messaging app for messaging Ethan. Ask me anything I’m here. To chat privately, find me on Ethan,” the app’s developer says.

As Business Insider reports, Ethan was created by founder of the Rubicam app, Ethan Gliechtenstein, and the app is apparently generating some buzz on startup discovery site Product Hunt right now.

“I wanted a fast way for my friends to message me — simply by opening the app — which is the only feature of the app,” Ethan said. “I’ve been off Facebook for a while so this is one way for people to reach me. Plus I own all the data. Also I can cut off annoying people easily if I wanted to.”

Of course, smartphone users are likely able to contact their friend Ethan without help from a special dedicated app. Not to mention the fact that the app isn’t restricted to his friends in the first place, as the quoted description above suggests, and many strangers have already installed it.

“I became sort of a virtual assistant at one point, finding music for romantic dinner or animes with dragons for them,” Ethan said about his app experience so far. “Sometimes it’s hard because they keep asking me questions while I’m sleeping. That’s why I added the rules on the home page.”

The developer isn’t sure how he might turn the app into a monetary success, but he is considering offering other people or companies such personalized apps.

Now, let’s just hope nobody decides to text Ethan the entire works of Shakespeare, with help of the app, while he’s sleeping. Yes, one man reverted to this particular trick in mid-March to exact revenge on a scammer, estimating that all of Shakespeare’s plays would need almost 30,000 messages.