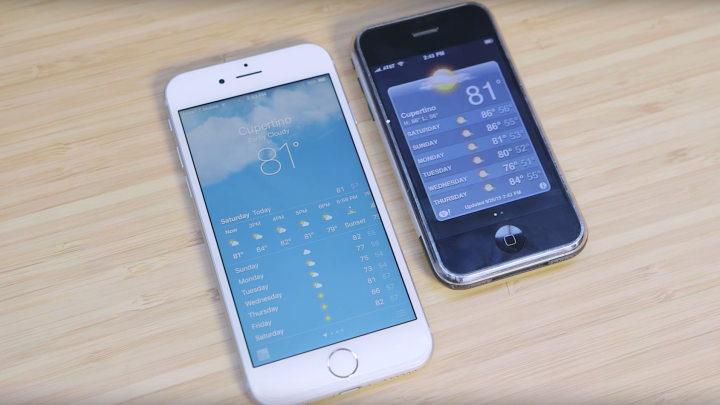 What if you broke your iPhone 6s and the only other phone you had available to you in a pinch was the original iPhone? Would it even be usable still? That’s what YouTuber Austin Evans wanted to find out in a new video in which he puts the iPhone 6s head-to-head with the first-generation iPhone. While today’s iPhones still have a lot of the same basic features as the original iPhone — most notably the home button and the multi-touch display — the first iPhone lacks just about everything else that you’d expect from a modern smartphone.

Let’s go through the laundry list of deficiencies: The phone’s 3.5-inch display with a resolution of 320 x 480 pixels is poor by today’s standards. It lacks even 3G connectivity and must be hooked up to AT&T’s 2G EDGE network. It still works fine for voice calls and SMS but the data speeds for watching videos are unbearably slow.

Oh, and the app situation is very, very bad. You can use Apple’s default apps and Google Maps seems to work fine still, but good luck installing any other third-party apps on the phone. As Evans’ video shows, you can’t even get Angry Birds to run on the O.G. iPhone right now since it requires iOS 7 or higher to work. And when it comes to notifications, Evans says they’re “right out of the Stone Age” since you get a popup notice right in the center of the screen whenever someone messages you, for instance.

So if you’re thinking of trying the original iPhone for a week just to see what it’s like, you probably shouldn’t, especially if you want to still have access to your Spotify, Instagram and WhatsApp accounts.

Check out Austin’s whole video below.