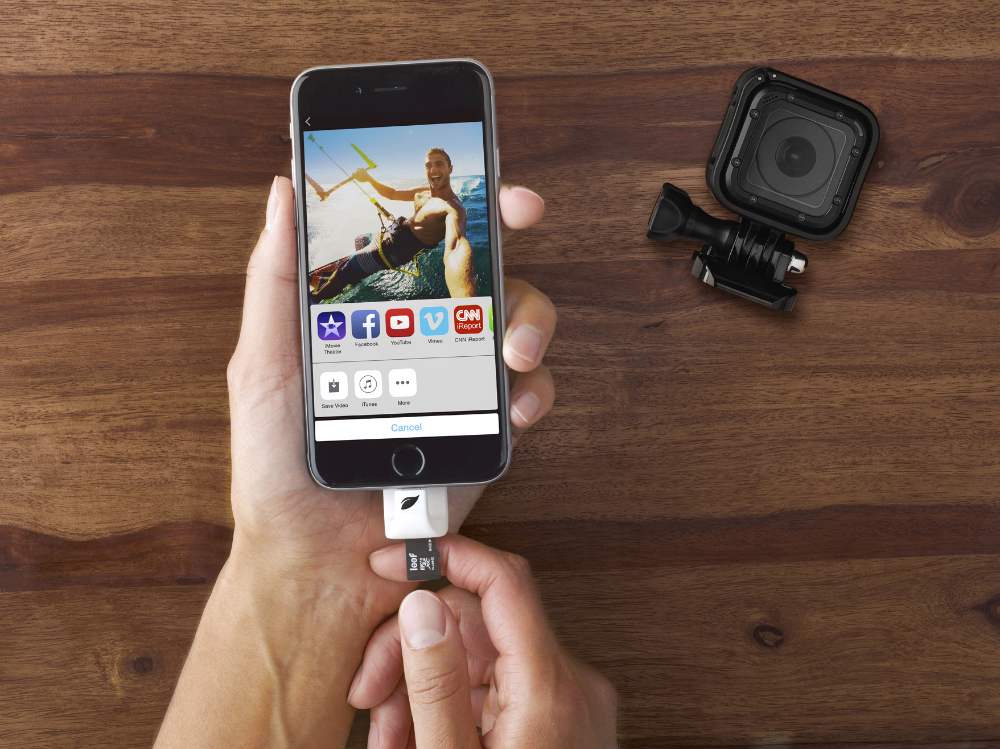 Lack of expandable memory is one of the iPhone’s “iconic” features, and long-time iPhone users already know what to expect from a new device. However, if you’re switching over from Android, you might find that the 16GB iPhone 6s has limited storage to begin with – though Apple fixed many storage woes with iOS 9 – and that your microSD cards are now worthless when it comes to using them on the go.

But don’t freak out just yet, as there’s a new accessory ready to bring microSD support to the iPhone 6s and any other iOS device that has a Lightning port.

It’s called the Leef iAccess, and this tiny new dongle lets users expand local storage on the iPhone and iPad, which is a highly sought-after feature on devices that have limited storage space. The iAccess costs $49.99 and can already be purchased online, but it does require a separate microSD card to work – that means it doesn’t have built-in storage like other Leef products.

The company is touting the accessory as a perfect way for accessing content recorded on GoPro cameras or other devices that use microSD cards without using a Wi-Fi connection. But the dongle can be used for other file formats as well, of course. A MobileMemory app from Leef lets you access the content stored on cards, supporting movies, photos, music files and documents.

Another cool feature: thanks to its ergonomic J-shape, the drive gets itself out of the way, bending underneath the iPhone.

Leef Introduces iAccess, An iOS Accessory for On-the-Fly Transfer of Videos, Photos & Other Content Between Devices
Drone and action cam users can plug-and-play their microSD memory card into an iOS device for immediate playback of content—no WiFi required

Salt Lake City, UT. (October. 14, 2015)—Leef, makers of the popular iOS memory expansion accessory iBridge, unveiled its latest mobile phone solution, the Leef iAccess. Designed for iOS users, the iAccess allows for easy, immediate transferring of large video, photo or music files between a device and iPhone or iPad. Leef iAccess is priced at $49.99 and is available to purchase from Amazon.com and at leefco.com.

Leef iAccess is one of the first memory accessories compatible with both iPhones/iPads and microSD cards. Using a compatible iOS Lightning Port and Leef’s proprietary MobileMemory app, iAccess moves videos, photos, music files, and documents from any device with a microSD card to an iPhone or iPad for viewing, saving, sharing or sending.

Drone or action cam users can plug and play their microSD memory card immediately into an iOS device to view footage, edit, and share without Wi-Fi, cables or a laptop, and from anywhere in the wild.

“Leef iAccess is all about the on-the-fly transfer of content from GoPros, drones or cameras to iOS devices,” said David Smurthwaite, partner at Leef. “To date, the other solution for transferring content has been WiFi or Bluetooth, which are klunky and slow. Leef products are unique, making transfers much quicker and easier without worrying about connectivity or cables.”

Approximately 1.5” x ¾”, the Leef iAccess is a discreet, ergonomically J-shaped drive created in ‘Apple white’ and fits easily in a pocket.